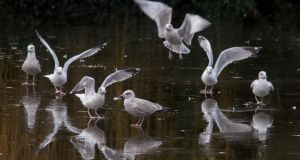 A “highly pathogenic strain” of the bird flu virus is currently in circulation according to the Department of Agriculture.

The department was responding to reports of significant numbers of dead birds discovered around the State including dozens of seagulls observed on Sandymount Strand in recent days.

The department said it did receive reports of dead birds on Sandymount Strand but they had gone missing when staff went to investigate.

“However, when Department staff went to retrieve the birds for testing in the Department’s laboratories as part of this Avian Influenza surveillance programme, the carcasses were no longer in the reported location.”

I found two dead birds on Sandymount strand today. Can our elected reps let me know what the procedure is when this happens? Is there a toxicology test and where can we see the results? ⁦@hazechu⁩ ⁦@EamonRyan⁩ ⁦@LaceyDermot⁩ ⁦⁦@CByrneGreen⁩ pic.twitter.com/NbLYrGCTV3

The birds had initially been reported to Dublin City Council and it had been suggested that council waste management workers had disposed of the birds. However the council said this was not the case.

A council spokesman said when the birds were reported to the council it immediately informed the department.

“However, it was too late to inspect the beach. The bird carcasses were not on the beach the following morning presumably removed by the tide,” he said. The council “would have kept any birds collected for inspection by Department of Agriculture, Food and the Marine”.

The Health Protection Surveillance Centre has confirmed no human infections with this particular virus have been reported and the risk to humans is considered to be “very low”.

However, the department has warned the public against handling any dead or injured birds discovered, but to contact the Avian Influenza Hotline.

“Birds can carry other diseases that are potentially transmissible to humans e.g. bacteria such as Salmonella and Chlamydia. Members of the public are advised not to handle sick or dead wild birds but should note the location and report the findings to the Department by Avian Influenza Hotline at 076 106 4403 (office hours) or 1850 200 456 (outside of normal office hours).”

In addition to responding to the hotline the department operates an “Avian Influenza early warning surveillance system” in co-operation with National Parks and Wildlife Service and the National Association of Regional Game Councils.

“We are currently receiving regular reports of wild bird fatalities across the country from the both the general public and this surveillance network,” the department said.