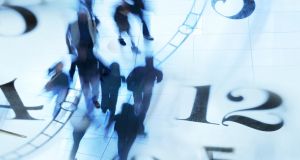 Thomas Merton described our culture of rushing as “a pervasive form of contemporary violence”. Getty Images

I have had the same anxiety dream twice since I started conducting funerals a few years ago. I take a little nap and then wake up in a blind panic because I was due at the church five minutes ago. I am not naturally a super-punctual person but, with funerals, I go overboard to ensure that I have a huge margin of time to spare. I absolutely need to be in a place of peace to do any kind of justice to this work. These occasions are once-off. They cannot be re-run. The responsibility rightly weighs heavily.

But in common with many of us in these lockdown days, most of my meetings and appointments are online. Despite the convenience of this, I am often a minute or two late. Yet this doesn’t compare to the stress of running late and losing the car keys and trying to locate mobile before leaving the house and all the things that can accompany a commute.

So – for those of us not working at the coalface – there is certainly a gift in these days of lock-down: a life with less hurry in it.

I am trying to find ways of laying hold of this gift – receiving it, appreciating it, embedding it, practising it, storing it up for the future so that I don’t revert to type when this season ends.

Living more deliberately is how Jesus lived. He didn’t rush or hurry, and this is unsurprising because rushing and hurrying are not morally neutral activities. God created time, and his timing is perfect. He is never late and he is never early, even if we can only see this in retrospect.

Carl Jung famously said that “Hurry is not of the devil, hurry is the devil”. This is certainly my experience.

In all this I am reminded of the famous “From Jerusalem to Jericho” experiment carried out in the early 1970s at Princeton Theological Seminary.

The less time a student felt he had, the more he lost touch with his compassion.

The irony that each would-be-priest was off to preach a sermon about the Good Samaritan makes the findings even more sinister!

I think of this chilling experiment at those times when running late causes me to lose touch with my empathy. I shout at the kids in a blood-curdling manner. I fantasise about shoving someone out of my way who is slowing me down, or about driving through a red light. My deeply held values of kindness and patience (which I would like to believe run through me like a stick of rock) totally evaporate.

And for what? Rarely am I hurrying to anything important in and of itself. I am not off to save someone’s life, or do anything that I will remember in a year’s time. Sometimes of course it is entirely appropriate to act swiftly and urgently (and some occupations demand this much of the time) but this is not what I am referring to here.

Thomas Merton described our culture of rushing as “a pervasive form of contemporary violence”. A life of hurry and busyness dishonours God because it sets store by the wrong things. It is not what Jesus modelled, which was the exact opposite.

In the words of St Vincent de Paul, “He who is in a hurry delays the things of God”.