The Irish Times most-read of 2018: Top 50 dominated by weather, Trump and abortion

May 25, 2018 | In 1983, the Eighth Amendment was added to Ireland's constitution, banning abortion. Today, 35 years on, voters decide to retain or repeal. Video: Kathleen Harris 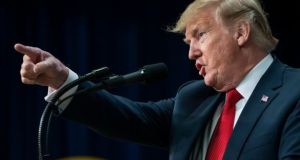 In a year dominated by extreme weather events, the Trump presidency, Brexit and Ireland’s historic abortion referendum, two Irish Times articles stood out from the list of the 50 most-read in 2018.

The article revealing that Ireland had voted to repeal the Eighth Amendment of the Constitution, which had effectively banned abortions in Ireland, was read more than 1.1 million times, making it the most-read online story in the history of The Irish Times at the time.

Based on exit poll data, Political Editor Pat Leahy’s report was published at 10.01pm on Friday, May 25th, just after polls closed in the landmark vote. It projected that Ireland had voted by a two-to-one majority to liberalise the Republic’s abortion laws, described in the headline as a landslide victory.

It was one of three articles that gained more than one million page views during 2018. The most-read article in 2018 was Fintan O’Toole’s opinion column “Trial runs for fascism are in full flow”. Published 5am on Tuesday, June 26th, the article examined the Trump presidency observing: “The blooding process has begun within the democratic world. The muscles that the propaganda machines need for defending the indefensible are being toned up. Millions and millions of Europeans and Americans are learning to think the unthinkable.”

The article was read across the globe, surpassing the abortion vote story to became the most-read Irish Times story with 1.34 million page views (and growing).

Some 52 per cent of the traffic was referred from Facebook. Almost half of the page views on the article came from the United States and 16 per cent from the United Kingdom, while the article was read in virtually every country in the world including Madagascar, Cook Islands, Angola, Sudan, Mali, Saint Vincent and the Grenadines, Andorra, South Sudan, Vanuatu, Bonaire, Saint Eustatius and Saba, Tonga, Guinea and even a handful in North Korea.

The second most read story of the year, Tara Brady’s one-star film review of Fifty Shades Free, gained steady page views after it was published in February. Owing to a internet quirk, the article attracted large referrals from Google searches, predominantly from outside Ireland.

Ronan McGreevy’s report on the death of Cranberries lead singer Dolores O’Riordan was the fourth most read story in 2018, followed by a background piece by Conor Gallagher on the Belfast rape trial and the long-read article “I was Ann Lovett’s boyfriend” by 2018 Journalist of the Year Rosita Boland.

The top 50 list of most read articles featured nine articles on the weather in a year that saw both record levels of snow and a heatwave that brought sustained high temperatures not seen in a generation.