Politicians and campaigners from the 'Yes' camp arrive at the RDS to a hero's welcome. Video: Enda O'Dowd 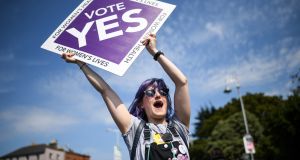 A member of the public holding a Yes placard in Fairview, Dublin as Ireland voted in the abortion referendum. Photograph: Jeff J Mitchell/Getty

Ireland has voted by a landslide margin to change the Constitution so that abortion can be legalised, according to an exit poll conducted for The Irish Times by Ipsos MRBI.

More than 4,500 voters were interviewed by Ipsos MRBI as they left polling stations on Friday. Sampling began at 7am and was conducted at 160 locations across every constituency throughout the day. The margin of error is estimated at +/- 1.5 per cent.

Counting of votes bega on Saturday at 9am, with an official result expected to be declared in the afternoon.

However, the size of the victory predicted by the exit poll leaves little doubt that, whatever the final count figures, the constitutional ban on abortion, inserted in a referendum in 1983, is set to be repealed. An exit poll published later on Friday night by RTÉ during The Late Late Show mirrored the projection seen in The Irish Times exit poll. The RTÉ poll predicted that 69.4 had voted Yes and 30.6 per cent had voted No.

Although polls had predicted victory for the Yes side, few anticipated the great wave of support for repeal of Eighth Amendment that swept the country. The highest Yes vote was in Dublin, where 77 per cent of voters backed the proposals, the Irish Times poll predicts.

The expectation among No campaigners that rural Ireland would vote against changing the Constitution was wide of the mark.

The poll suggests that result in the rest of Leinster, outside Dublin, will be 66 per cent Yes to 34 per cent No, while Munster will also break 66-34 in favour of repeal.

Even Connacht-Ulster, expected to be the bulwark of the anti-repeal vote, voted in favour of the constitutional change by 59 per cent to 41 per cent, the poll finds.

As expected, younger voters were overwhelmingly in favour of the change, with whopping majorities in all age groups under 65. Those over 65 voted against the proposed change, the poll finds.

Among the youngest voters, support for the change was overwhelming – the poll finds that 87 per cent of those aged 18-24 voted for repeal.

The results of the exit poll suggest a great swing towards repeal in the final days of the campaign, a trend hoped for by campaigners and visible on the streets, on canvasses and at Dublin Airport, where thousands of repeal supporters arrived after flying home so they could vote for the constitutional change.

The massive margin suggested by the exit poll will strengthen the hand of the Government when it brings the promised legislation to the Dáil in the autumn.

Minister for Health Simon Harris said earlier this week that he would introduce legislation allowing for abortion on request up to the 12th week of pregnancy, and thereafter in specific circumstances, to the Dáil after the summer, and seek to have it passed by the end of the year.

Abortion will remain illegal in almost all circumstances until the Oireachtas passes legislation providing otherwise.