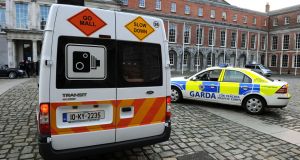 A motorcyclist travelling at 198km/per hour was among 476 vehicles detected by gardaí travelling over the speeding limit on Thursday.

Less than one per cent of the 101,900 vehicles monitored by safety cameras detected by gardaí on Thursday as part of its Christmas and New Year road safety campaign were speeding.

Among the most notable were a motorcyclist doing 198km/h in a 100km/h zone on the N5 at Drummindoo, Westport, Co Mayo. A car in Dublin was caught doing more than double the speed limit when it was travelling at 122km/h in a 50km/h zone at Mount Brown in Dublin 8.

Another vehicle was travelling at almost twice the speed limit at 109km/h in a 60km/h zone on the N25 at Cloncoskoran, Dungarvan, Co Waterford. Another motorist was detected travelling at 116 km/h in an 80 km/h zone, on the R446 at Ballinasloe, Co Galway.

In Co Laois, on the M7 motorway at Portlaoise a motorist was detected travelling at 135km/h in a 120km/h zone.

Gardaí thanked the majority of drivers who drive responsibly but said there are many who do not. It added that speeding was a major factor in fatal road collisions.

So far this year 145 people have died on the State’s roads, five less than last year.