Cranberries lead singer Dolores O’Riordan has died suddenly in London. We look back at some of her greatest hits. Courtesy: Island Records 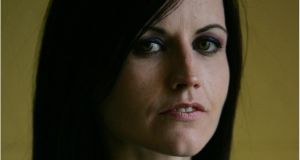 Cranberries lead singer Dolores O’Riordan has died suddenly in London at the age of 46. No cause of death has been revealed. The singer was in London for a recording session on a new album.

Police in Westminster said they were called to a hotel on Park Lane at 9.05am. “A woman in her mid-40s was pronounced dead at the scene,” a Metropolitan Police statement said. “At this early stage the death is being treated as unexplained.”

Her publicist said that family members are “devastated to hear the breaking news” and have requested privacy “at this very difficult time”.

She is survived by her ex-husband, Don Burton, and her three children, Taylor Baxter, Molly Leigh and Dakota Rain.

The parish priest from her home town has confirmed her funeral will take place in Co Limerick.

Fr James Walton, parish priest at Ballybricken & Bohermore Parish, said: “I only found out this afternoon. Her family is very devastated and upset. “The suddenness of her death has been a shock. I met Dolores two or three times when she was home visiting family. She was a lovely lady.

“Her family are still waiting for more details to come from London about her death. The plan is for her to be buried here at home. When that will be will depend on when her body is released.”

A spokeswoman for the London Hilton, on Park Lane, said: “It is with deep regret that we can confirm a guest sadly passed away at the hotel on Monday 15th January. “We offer our sincere condolences to their family at this difficult time. “Team members acted swiftly to alert the Metropolitan Police and we are co-operating fully with their investigation.”

O’Riordan was born in Ballybricken, Co Limerick, in 1971, the youngest of seven children. She joined The Cranberries in Limerick in 1990. They were one of the biggest Irish bands of the 1990s, selling more than 40 million records over their career. Their most popular hits included Zombie and Linger. They split up in 2003 and re-formed in 2009.

Last year the band released an acoustic album, Something Else, but had to cancel tour dates in Europe and North America because of O’Riordan’s ill health.

In May, The Cranberries cancelled a string of shows after O’Riordan was instructed by her doctors to stop working for a month for medical reasons associated with a back problem. A further set of shows in North America, due to take place in September and October, were cancelled in July.

We are devastated on the passing of our friend Dolores. She was an extraordinary talent and we feel very privileged to have been part of her life from 1989 when we started the Cranberries. The world has lost a true artist today.
Noel, Mike and Fergal

O’Riordan posted on the band’s Facebook account on December 20th: “Hi All, Dolores here. Feeling good! I did my first bit of gigging in months at the weekend, performed a few songs at the Billboard annual staff holiday party in New York with the house band. Really enjoyed it! Happy Christmas to all our fans!! Xo”

In November she recorded the theme song for the animated short film Angela’s Christmas, which was broadcast on RTÉ One on Christmas Eve.

President Michael D Higgins paid tribute to the late singer. He said she and The Cranberries had an “immense influence on rock and pop music in Ireland and internationally”. The President added: “I recall with fondness the late Limerick TD Jim Kemmy’s introduction of her and The Cranberries to me, and the pride he and so many others took in their successes. To all those who follow and support Irish music, Irish musicians and the performing arts her death will be a big loss.”

Taoiseach Leo Varadkar said for anyone who grew up in Ireland in the 1990s, Dolores O’Riordan was the voice of a generation. “As the female lead singer of a hugely successful rock band, she blazed a trail and might just have been Limerick’s greatest ever rock star. RIP,” he tweeted.

Other tributes poured in from across the music world.

Kinks guitarist Dave Davies posted a photograph of himself with O’Riordan and tweeted: “I’m really shocked that #DoloresORiordan has passed so suddenly. I was talking to her a couple of weeks before Christmas. She seemed happy and well – we even spoke of maybe writing some songs together – unbelievable God bless her.”

Hozier tweeted: “My first time hearing Dolores O’Riordan’s voice was unforgettable. It threw into question what a voice could sound like in that context of Rock. I’d never heard somebody use their instrument in that way. Shocked and saddened to hear of her passing, thoughts are with her family.”

Kodaline, who have supported The Cranberries on recent tours, tweeted: “Absolutely shocked to hear about the passing of Dolores O’Riordan! @The_Cranberries gave us our first big support when we toured with them around France years ago! Thoughts are with her family and friends.”

Minister for Culture, Heritage and the Gaeltacht Josepha Madigan said she was “very saddened” to hear the news of the singer’s death.

In a tweet on Monday evening, Ms Madigan said O’Riordan’s “haunting vocals on classics such as Linger and Zombie will live on forever.”

She added: “I’d like to pass on my condolences to her family at what must be a very difficult time for them”.

Limerick City Labour TD Jan O’Sullivan also paid tribute to the singer, saying “her talent and that of her band mates put Limerick on the map musically.”

In 2016, air rage charges against  O’Riordan were formally struck out after she paid  €6,000 to the court poor box  following an air-rage incident on an Aer Lingus flight from New York to Shannon Airport on November 10th, 2014.

It emerged during the trial that O’Riordan was suffering from a “severe mental illness” at the time of the incident. She had no memory of what had happened. The court was told that O’Riordan had been paranoid and delusional and later spent three weeks at St Patrick’s psychiatric hospital.  The judge said it would be unfair to criminalise her.

In an interview last year, O’Riordan spoke about the impact the death of her father Terence in 2011 had on her and that she felt his presence after he died.

“When it happened to my father, I was very close to him. I was actually holding his hand when he took his last breath. I worried that he would die and I would be on tour,” she told the US-based Soul Sisters podcast.

“I felt something coming from him into my hand and into my body. I felt like a bit of his spirituality coming into me, and then I felt like he was inside me for a while. His spirit was in my spirit that we were caught up. It took me two years to let go.”

She said death had been a preoccupation since she was a teenager. “I used to go to graveyards and hang out there. I know I have to die. You have to die. We all have to die. When is the question. How long do we have here?” .