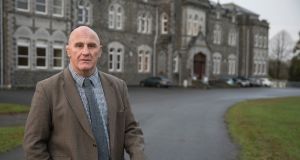 The man who will always be remembered for scoring Ireland’s first ever World Cup try against New Zealand has long departed the playing side of things but is now helping to take on a different challenge.

For just over a year, former international star Gary Halpin has been director of boarding at Cistercian College, Roscrea, which has overcome dwindling numbers and near-closure in the past 21 months and is now facing the future with renewed confidence thanks to a joint effort by staff, parents, board of management, students, and the trustees at Mount St Joseph Abbey.

“We need to get those numbers above 200 as quickly as we can but there’s great work being done and it’s going in the right direction,” chairman of the board of management, past pupil and parent Ronnie Culliton says.

The big change in 2017 which helped boost those numbers was the introduction of five-day boarding and day-boarding to add to the seven-day boarders who had previously made up all of the student population. The college now has 39 five-day boarders and 34 day-boarders (who go home every night).

The introduction of Halpin, a well-known face in rugby circles since his time shoring up the Leinster and Ireland pack, which included that try against Jonah Lomu, Zinzan Brooke et al at the 1995 Rugby World Cup, was another step towards promoting the college to prospective students and their parents.

Previously, the Kilkenny native worked in education across the Irish Sea for over 25 years, and the stars aligned when the offer came from Roscrea to take up the role of director of boarding just after he decided to send his daughter back to Ireland to go to school and was actively considering a move home of his own.

“One thing led to another and I came to a school where there was an element of risk, but there’s always an element of risk with these things,” he says, referring to the subsequently reversed 2017 decision by the monks at Mount St Joseph Abbey to close the college.

“I have such a long association with Roscrea, never as a student but as a schoolboy [at Rockwell College] I had played an awful lot of rugby here and did an awful lot of athletics here. I had a fair idea of what the school was about.

“It was different at first, in so far as it had been a while since I taught just boys, I had been in a co-ed school, so there was a small bit of readjustment there. But right from the start I was massively enthusiastic about the type of kids I found in the school. They were really good kids to be honest, predominantly from Irish rural backgrounds, and I was really impressed on day one when I got to see the mass participation in sport . . . On my first couple of days, I went walking around the school and practically everyone was out playing rugby and when they weren’t playing rugby, they were out playing hurling. I was really impressed with how active Irish kids are.”

While other sports are also played at the college – it recently won a national basketball trophy in Portlaoise – music and drama are also emphasised and the students successfully staged a performance of Les Miserables in recent weeks.

Halpin describes his main day-to-day role as taking effective charge of the students from when they finish classes at 3.30pm until they resume at 8.30 the following morning. During that time they have sport and other extra-curricular activities, supervised study, meals and, of course, dormitory time.

“Day boarders are totally new territory for many of the teachers,” he points out. “More than anything else, it’s forced us to re-calibrate our thinking a bit. Even little things have to be thought out a bit more and you have to consider parents driving from Nenagh or Birr or wherever and pick-up times have to be considered. For example, in the past when there was opera practice, you could pull 30 guys out of study if you wanted to, but now you can’t. They might be going home.”

A number of developments are taking place on the college campus while other changes may be faced in years to come. The admission of girls, for one. “I don’t think they should exclude anything really,” the director of boarding says, “but it’s not in the immediate future.”

Or, as Ronnie Culliton puts it: “We’re busy settling down as we are” although he says they would like to be in a position to welcome girls at some future date.

In the meantime, after the wobble of spring 2017, it’s all about consolidation. “We’ve a long way to go, but we’re very pleased right now.”