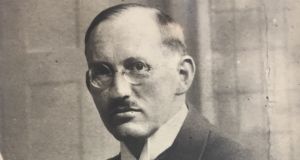 Prof Ludwig Mühlhausen was a professor of Celtic studies at Berlin University and a Nazi spy. Photograph: BBC

It could be a story from a spy novel: the German scholar who claimed to be learning Irish in Donegal but who was instead an “enthusiastic” Nazi secretly gathering information for a potential invasion.

Prof Ludwig Mühlhausen went on to broadcast Nazi propaganda to Ireland during the second World War and in 1945 appealed to a man he described in his CV as a “personal friend” – the president of Ireland, Dr Douglas Hyde – to intervene and have him released from a prisoner of war camp.

This remarkable story has been uncovered by BBC journalist Kevin Magee, and is told in the BBC Gaeilge documentary Nazi sa Ghaeltacht – Nazi in the Gaeltacht – on Sunday.

Magee first heard the rumours about the Nazi spy when he went to the village of Teileann, in southwest Donegal, to improve his Irish.

But locals had always been suspicious about why the German scholar was in Donegal, and so Magee set out to find out if the story of the Nazi in the Gaeltacht was true. Not only would he confirm the rumour, but also uncover the evidence that proved the academic was a fervent Nazi who had gone on to become an SS officer decorated by Heinrich Himmler.

“The plot reads like a World War two thriller, except this story is for real,” says Magee.

Mühlhausen came to Teileann in 1937. The professor of Celtic studies at Berlin University and a fluent Irish speaker, he spent six weeks there learning Ulster Irish and collecting tales from local storytellers.

Yet he was far from a typical student. “One of the first things Mühlhausen did in Teileann after he’d found somewhere to stay was hang a large picture of Hitler on his bedroom wall,” Magee explains.

“He took photographs everywhere he went and measured the depth of Teileann Bay by dropping lead weights into the tide. Locals later speculated he had been scouting the place out as a potential landing site for Nazi U-boats.”

Mühlhausen translated 10 of the stories from one renowned Teileann seanchaí into German, and sent a copy to the then taoiseach and minister for foreign affairs Eamon de Valera. But he was also sending reports back to Germany, in which he despaired of what he saw as the “waste” in the Irish economy and the lack of enterprise among local people. With the benefit of German efficiency, he wrote, fishing and farming could be made much more profitable.

Military intelligence in Dublin was keeping a secret file on the German scholar, where he was described as an “enthusiastic Nazi”.

“He thinks German culture would be good for us, and Ireland would be better run by Germans or British,” one report wrote.

Also in the archives is a box of files on the Nazi plan to invade Ireland. In it is what was effectively an invasion handbook, containing some familiar images. They appear to be the photographs Mühlhausen took of Teileann Bay.

Mühlhausen never returned to Ireland, but during the second World War he became the Irish language equivalent of the propagandist Lord Haw Haw, and broadcast Nazi propaganda in Irish which, incredibly, included reminiscences about the time spent in Teileann.

At the war’s end and as an Allied prisoner in Naples, he appealed to the Irish president. The letter is written in the old Irish script; on the back of the envelope is Mühlhausen’s address in the prisoner of war camp and his SS rank.

“There is no evidence Hyde ever replied to him, and there was certainly no response I could find,” says Magee.

“In his file in the Bundesarchiv in Berlin there is his CV, and he wrote in it that he was a personal friend of Douglas Hyde. But I never found any evidence that the relationship was two-way, it was all coming from Mühlhausen.

“I felt very strongly that he was inveigling himself in with people, but it didn’t appear to be a two-way relationship.”

The book sent to de Valera also failed to bear fruit. Magee uncovered the reply sent by de Valera, “thanking him, but he didn’t expand. It doesn’t give the impression he was his friend”.

“But he was definitely trying to make contacts with the upper echelons of Irish society. He wanted to operate at that top tier – and why wouldn’t you, if you’re a spy?”