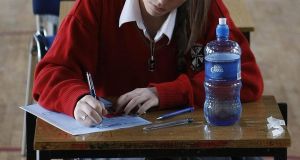 Ministers have been warned by Government officials of potential lawsuits being taken by Leaving Cert students against the State due to the introduction of predicted grades this year.

They have also been advised that the cost of implementing the Sláintecare health reform programme is now likely to be greater than the original €5.8 billion estimate and that “specific elements such as additional nurses and consultants, hospital beds and home help hours will need to be implemented in a manner consistent with sustainable budgeting”.

The warnings are contained in briefing material prepared for Minister for Public Expenditure Michael McGrath by his department.

The documents also reveal that there are concerns that some public authorities may face prosecution by the Pensions Authority arising from deficits in the administration of the pension scheme for more than 140,000 State employees recruited since 2014. The Single Pension Scheme, as it is known, was very complex to administer as it was based on career average earnings, the briefing papers state.

“To date, compliance with the legislative requirements of the scheme by employers has been poor,” they say. “It is clear that if the scheme is to be robustly administered over the long term, proper supports are needed. Otherwise errors will be made and compliance will remain an issue. This presents potential legal risks to the State and if challenged could undermine the scheme itself.”

In May, the then government announced that the Leaving Cert exams were being postponed and a new calculated grades system was being introduced based on students’ schoolwork.

At the time, then minister for education Joe McHugh conceded there were “legal vulnerabilities” relating to the decision. The attorney general is understood to have briefed Ministers on areas of concern regarding students’ legitimate expectations to be able to sit an exam, as well as their right to take up a college place after sitting the Leaving Cert.

Some legal sources also say hundreds of students who have been unable to get a calculated grade – on the basis that they took subjects outside school or were home-schooled – may also have grounds for lawsuits.

The documents also show the net financial impact of the cancellation of the Junior Cert and introducing the calculated grade model for the Leaving Cert will see a fall in income for the State Exams Commission due to the loss of exam fees.

The material also throws light on the scale of the financial challenges facing the third-level sector. It notes that the university sector is particularly exposed due to a loss of income from international student fees, research funding and student rental income. It says the Higher Education Authority has assessed the impact for this year and next year as being about €500 million.

The documents state that while higher education institutions have multiple sources of revenue and hold reserves, “some will be better financially equipped to deal with the crisis than others”.

Education authorities are assessing a detailed cash flow analysis of the higher education sector. However, the document adds that any additional State funding may potentially affect their accounting treatment on the general government balance sheet.

This is a reference to the fact that universities – which have borrowings of about €800 million – are not included on the government balance sheet on the basis that they are autonomous and generate most of their income privately.

However, officials are concerned that extensive State support could change this accounting treatment, which could have implications for wider government borrowing.

Documents also warn that the job losses and income reductions linked to the coronavirus crisis could lead to a sharp rise in numbers entitled to student grants. This currently costs about €400 million a year.