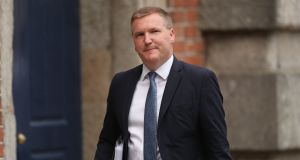 The decision to increase the salary of the third ‘super junior’ Minister in Cabinet by over €16,000 has been defended by Minister for Public Expenditure Michael McGrath.

He also said he he has no knowledge of his party, Fianna Fáil, opposing such an increase in the last Dáil, saying the issue was never raised to him.

The current legislative situation is that two junior ministers or ministers of State are entitled to receive an annual allowance of €16,288 on top of a €124,439 salary.

Mr McGrath said the Cabinet agreed unanimously this week that the third Minister of State in the current Government should also be entitled to such an increase.

“Fundamentally there was an issue of having three Ministers of State at the Cabinet table with same level of responsibility as (senior Minsters). The legal position is that two of them get extra money but not the three,” he said.

He said the change was taken to ensure that all three be “treated equally”.

However, in the last government, the third super junior, then minister of state for higher education Mary Mitchell O’Connor was unable to receive the extra salary.

Asked if this had been because of Fianna Fáil opposition, Mr McGrath said the issue had never been raised with him and a proposal had never been put before the Oireachtas.

When asked about a statement at the time from the party’s education spokesman Thomas Byrne, saying an increase for Ms Mitchell-O’Connor would be fiercely opposed, he said he was not aware of it.

Minister for Culture Catherine Martin of the Green Party said she agreed with the decision: “There are three Ministers of State and we believe they should be treated equally,” she said.

Asked about an interview Green Party leader Eamon Ryan gave in the wake of the leadership context in which he would not say when he would step down, she said she had pledged her support for his leadership.

On when he steps down she said: “It is a matter for Eamon and has never been discussed (with me).