Up to retailers to decide how to use VAT cut, Varadkar says 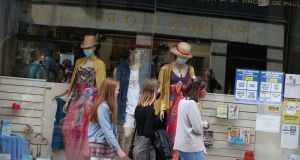 Retailers can decide for themselves how they use the VAT reduction announced in the July stimulus, Tánaiste Leo Varadkar has said.

The Government announced on Thursday that there would be a six month fall in the higher VAT rate of 23 per cent to 21 per cent, beginning on September 1st and running until February at a cost of €440 million.

The measure was part of the largest-ever cash injection for the ailing Irish economy and was announced by the Government in a bid to rescue it from the effects of the pandemic.

More than €5 billion in cash, along with €2 billion in loan guarantees for businesses, will be spread widely across public investments, worker and welfare supports, and funding for business and tax cuts, with Taoiseach Micheál Martin insisting that most of the money will be applied this year.

It is the single biggest cash stimulus ever for the economy – with business group Ibec estimating that it represents about 10 per cent of domestic demand in the second half of the year – and follows the example of other countries, notably the UK.

Speaking on Friday, Mr Varadkar said retailers will decide for themselves whether or not they are going to pass on the VAT cut to customers and reduce their prices by two per cent. “Some might, some might not. It is a decision for themselves depending on their circumstances,” he told RTÉ’s Today with Sarah McInerney’s show.

“This is something that is being done to boost business, to boost employment, to encourage spending and you may have retailers who take the decision that the difference that two per cent would make could be the difference between them keeping on an employee or not.

“From my point of view, if I was going into a clothes shop today to buy a T-shirt or a suit or shoes, rather than a two per cent reduction in the cost of that I would rather keep on the staff member.”

Asked by Ms McInerney if there were mixed messages being put out by Government as she said Minister for Finance Paschal Donohoe had said the VAT rate should be used to pass the reductions on to consumers, Mr Varadkar said there was no mixed message around the objective, which was to sustain employment. The retailer could make the decision, he said.

Mr Varadkar defended the choices made in the Republic to revive the economy compared to decisions in Northern Ireland where VAT rates had been reduced to help the hospitality and tourism sector.

“Of course they (the hospitality and tourism sector) would like to have it both ways, they would like to have the best from the North and the best from the Republic of Ireland. But that is not how the world works. We had to make a choice. And when I asked people in restaurants and hotels which one is more important to you, the wage subsidy scheme or the VAT reduction of a few percent, they all said the first one.”

Mr Varadkar pointed out that the wage subsidy scheme will end in October in the North. “I think that is the wrong decision especially with Brexit coming,” he said.

Government spending is now running some €16 billion ahead of what was expected before the pandemic hit, a situation officials conceded was not sustainable in the long term. Nonetheless, senior sources also said the October budget was likely to feature additional stimulus measures.

A “staycation” tax voucher worth €125 to encourage off-season holidays in Ireland was also unveiled yesterday. Mr Varadkar defended this tax rebate element in the which he said is aimed at getting people to spend, “to liberate their savings” and get more people back to work. He said that there has been a “huge increase in the amount of money that people are saving at the moment” and rejected a suggestion by Sinn Féin’s finance spokesman Pearse Doherty that the rebate excludes one million people.

“Anyone who pays income tax or USC can benefit from this, so if you spend any where between €25 and €625 on a weekend away or in a local restaurant or local hotel, using an app you can take a photograph of the receipt, send it on to the Revenue and you’ll get a tax rebate in the next tax year,” he told Sarah McInerney.

“It is designed to get people to spend . . . It’s designed to get jobs back, that’s the whole point. Sometimes you get a voucher for €100 – you go to restaurant or shop maybe you spend €30 or €40 more, but when you get 20 per cent tax back, you might actually make a trip you wouldn’t have made before and that’s bringing many hundreds of euros into the economy. So it’s designed to liberate those savings.”

Mr Varadkar said that administering a voucher was not straight forward. “We do know everyone who pays income tax and USC in the country, we’ve a number for them, we know where they live, we actually don’t have a list in Ireland of every man, woman and child and where they live.”

When asked about the possibility of using Personal Public Service (PPS) numbers, the Tánaiste said “there are absolutely huge numbers of duplicate PPS numbers and there are PPS numbers of people who don’t live in the country any more. So we could end up sending vouchers to people who lived in Ireland for six months years ago”.

“I think if you went for a voucher system you’d find yourself with something chaotic quite soon. Take for example the electoral register, everyone knows how inaccurate that is, and it doesn’t include children. So the Sinn Féin idea, like a lot of what they put forward hasn’t been properly thought through.”

Mr Varadkar said that the scheme is targeted at people who have lost their job and that it wasn’t about “the person sitting in the restaurant, it’s about the person who used to work in the restaurant . . . so that more of those 300,000 people who are on the pandemic unemployment payment can get back to work. At its peak over 600,000 were on that payment, it’s down around 300,000 now, we think it will fall below 300,000 in the next couple of weeks, we’d like to get as many of those people back to their old jobs as possible.

“I think hospitality businesses and restaurants will be clever about it - this is an agile and innovative industry and I think they’ll arrange packages around it.”

Other measures announced on Thursday include the pandemic unemployment payment being extended until next April, but the rates will be cut from September and it will also be closed to new applicants from then.

The temporary wage subsidy scheme is also being extended to March next year, but will be recast as a new scheme from September, with officials said to be working on a new permanent scheme which would see State support for temporarily laid-off workers. The extension of the scheme to April will involve lower payment rates to employers, but newly hired staff including seasonal workers will qualify and the total cost will be €1.9 billion.

The bike to work scheme is being extended, while there will be significant investment in cycling and walking facilities, €10 million for the arts and €10 million for tourism. A range of new training and employment grants are included for individuals and businesses, as well as incentives to take on apprentices.