Tánaiste to express conern over impact of US policy on Palestinians 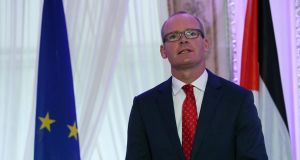 Tánaiste Simon Coveney will raise concerns with US officials about the United States’ policy in the Middle East this week as he attends the United Nations General Assembly.

Speaking in New York ahead of his address to the general assembly on Friday, Mr Coveney reiterated his criticism of the Trump administration’s decision to recognise Jerusalem as the capital of Israel and stop funding UNWRA, an agency that helps Palestinian refugees. But he recognised that peace in the Middle East could only be achieved with US involvement.

“We have been very critical of the US decision to withdraw funding from UNWRA, the humanitarian consequences of that for women and children in particular, not only in Gaza and the West Bank but also in Jordan and Lebanon. I am asking the US to reconsider that decision. We also think that it was a mistake to recognise Jerusalem as the capital of Israel, to move their embassy there. That has inflamed the situation, that has made peace in my view, more difficult.”

Mr Coveney said it should be “no surprise” that Palestinian leader Mahmoud Abbas and senior Palestinian officials had stopped off in Ireland last weekend on their way to the UN. “They feel we understand their concerns and will advocate for them and we will.”

However he said that Ireland was also a “friend of Israel,” and that he recognised that Israel has “legitimate security concerns that need to be addressed in a peace settlement.”

“We are trying to talk to both sides. We’re trying to share our own experience of how to make a peace process work. Irish people are very interested, and feel a real solidarity with Palestinians in particular, in terms of the sense of injustice they are currently suffering, and I think it is important that I articulate that.”

In particular, he cited the expansion of settlements on Palestinian land.

The Trump administration is preparing to unveil a new Middle East strategy, a policy priority that is being managed by Mr Trump’s son-in-law and special advisor Jared Kushner.

The US president met with Israeli prime minister Benjamin Netanyahu on Tuesday ahead of his address to the UN Security Council. Speaking after the bilateral meeting, the US president said he wanted to unveil a peace plan within the next two to three months. Later he said he supported the idea of a “two-state solution — as long as they’re both happy, I’m OK with one state, two states, whatever they want”.

Mr Coveney also intends to highlight Ireland’s case for securing a seat on the UN Security Council in 2021-22 this week at the UN. Officials have scheduled meetings with approximately 30 countries, at ministerial, prime ministerial and in some case presidential levels.

Among the UN member states that the Tánaiste will meet with are small island states similar to Ireland, and several African countries.

“We face a very significant race to be elected on to the UN security council,” he said. “There are three countries for two places. Norway and Canada are the other two countries. They’re big spenders and big countries, but I’m still confident that Ireland can win.”

“We will be reminding people why Ireland wants to be on the Security Council. We want to be a courageous, independent voice for multilateralism, for human rights worldwide. We want to make the case for the UN, for the role it plays in everything from climate change to development to conflict prevention and post-conflict management.”