Seclusion and restraint in schools: Children with disabilities at risk

Many school staff not trained to deal with challenging behaviour, say campaigners 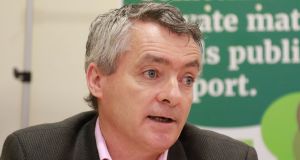 Paddy Connolly of Inclusion Ireland says a lack of training among staff means vulnerable children are being placed in isolation for hours at a time. Photograph: Nick Bradshaw

Children with disabilities as young as five years of age are at risk of psychological harm caused by the use of unregulated seclusion and restraint practices in schools, according to campaigners.

Unlike children’s residential care, there are no detailed guidelines on the use of seclusion and restraint in schools.

In addition, the Department of Education does not require schools to provide data on these types of interventions.

A new report by Inclusion Ireland, the representative group for children with intellectual disabilities, finds many staff are not qualified to use restraint and says there is a “real, ongoing risk of physical and psychological harm to children”.

It has documented more than a dozen cases where parents say their children were physically restrained, isolated or secluded by adults during the school day.

The group says that despite being asked by the National Council for Special Education on three occasions, the Department of Education had failed to provide best-practice guidelines or to introduce reporting and monitoring protocols.

Paddy Connolly, chief executive of Inclusion Ireland, called on Minister for Education Richard Bruton to act “urgently” to regulate and reduce the practices of restraining and secluding children with disabilities in our schools.

He said a lack of training among staff meant vulnerable children were being placed in isolation for hours at a time for behaviour that could be dealt with more effectively using positive support.

“It is unfair on teachers and a neglect of children’s developmental and welfare needs that the department continues to ignore this issue,” he said,

“Seclusion and restraint should be a matter of last resort. It leaves teachers exposed, isolates parents and adversely impacts on the mental health and education of the children concerned.”

In a statement, the department said school boards of management were responsible for the care and safety of all pupils in their schools.

“Schools should supervise and support children who are distressed or out of control until they have recovered and are able to re-engage in the classroom,” it said.

“In some circumstances this may mean the temporary removal of a child from the environment where the problems have arisen.

It said schools may seek advice from the National Educational Psychological Service and other sources on how children with behavioural needs can best be supported in school.

The department said it was working on the development of guidelines for schools on the specific issue of the use of restraint/intervention.

“The proposed guidelines will be developed to assist schools’ in responding in circumstances where students pose an immediate threat of harm to themselves or others,” it said.

The Inclusion Ireland report states that the department had been repeatedly asked to issue guidelines to schools on the issue of restraint and seclusion.

The National Council for Special Education asked for guidelines in 2012 and in 2016. Last year it repeated this call in its review of the special needs assistant (SNA) scheme.

In its latest report, the council highlighted the seriousness of the situation around supporting children with “challenging behaviours in school”.

It stated that these students require specialist supports but are being supported by SNA staff without specialist training in behaviour management and called for “immediate action”, warning of “very serious consequences for students and staff”.

Mr Connolly said it was important that education partners and the department address the issue.

“Children have a constitutional right to an education and for the children detailed in the discussion paper, and probably many more, their education is being restricted or in some cases removed entirely because of their disability,” he said.

“Ireland’s record in relation to children with disabilities in general is shameful. Whether it’s the disarray of the assessment of need system, their exclusion from personalised budgets or failures in the education system, its true to say that this Government is failing children with a disability.”