Speaking at a Solidarity party press conference, Take Back the City spokesperson Oisín Coulter and Peter McVerry call on the Government to build public housing on public land. 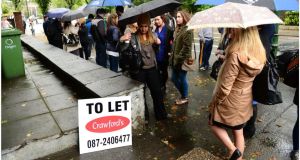 The average rent in the greater Dublin area is now €1,587, a monthly increase of €128 over a 12-month period. Photograph: Bryan O’Brien

The cost of renting a home in Ireland continues to rise with new figures pointing to sharp spikes in urban areas and average monthly rents in Dublin of almost €1,600, an increase of nearly €130 in 12 months.

The data published by the Residential Tenancies Board (RTB) for the first time draws a distinction between existing and new tenancies and shows a substantial divergence between rates of increase for sitting tenants and those looking to rent for the first time.

The figures, produced in conjunction with the Economic and Social Research Institute (ESRI), are based on 18,716 new tenancies registered with the RTB. They show that between April and June the national average monthly rent was €1,094 up from €1,017 in the same period last year.

The figures now separate long-term leases renewed by sitting tenants from other registrations with separate averages calculated for both.

One in five registered tenancies in the second quarter was a renewal, up from one in 10 two years ago, suggesting that people are more likely to stay in the rental accommodation they have rather than seek somewhere new to live.

Annually, rent increases were put at 7.6 per cent with Dublin as a whole recording increases of 8.8 per cent and the Dublin city area seeing rises of 9.5 per cent.

The annual growth rate outside the greater Dublin area (GDA) was 6.3 per cent, down from 6.5 per cent in the first quarter.

The average rent in the GDA is now €1,587, a monthly increase of €128 over a 12-month period. Rents in Dublin city stood at €1,549, which is due to the smaller size of accommodation available in the area.

The average rent outside the GDA and Dublin city was put at €817, up from €768 a year earlier.

The second highest rents in the second quarter of the year were in Cork city, where the monthly average was €1,123 (up 6.2 per cent in 12 months). On an annualised basis, rents in Limerick city have been growing fastest, up 12.4 per cent the second quarter to an average of €880.

“Affordability remains a significant issue in the rental market with continued economic and population growth contributing to rising demand,” said RTB director Rosalind Carroll. “We can see rents have continued to increase with growth rates back up in Dublin.”

She said additional analysis had given the RTB “more insight into what is driving growth, particularly in rent pressure zones”.

She said the substantially faster rate of increase for new lettings made it “clear that this market must continue to be monitored and it underscores the importance of the proposed legislation in this area”.

Minister for Housing Eoghan Murphy said people were “paying too much in rent and this has to be better controlled”.

He said he would shortly be introducing new rent protection measures in the the Dáil. “I’ll also continue to pursue measures to see longer leases and tenant protections when properties are sold,” he said, adding that there were some signs of stability but “still a way to go”.