Legislation for ‘opt-out’ organ donation to be published next month 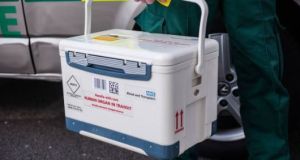 Ireland remains one of a few EU countries not to have an opt-out system. The Bill will also regulate the removal, retention, storage, use and disposal of human tissue from deceased persons. File photograph: Getty Images

Thirteen years after first being proposed, long-awaited legislation allowing “opt-out” organ donation in Ireland will be published next month by Minister for Health Simon Harris.

The Human Tissues Bill arose out of recommendations of the Madden Report in 2015. It primarily looked at practices where organs were removed from the bodies of deceased children and infants without the consent of their parents.

Successive governments have promised to publish the Bill and it was included in the Programme for Government of the current Fine Gael-led Coalition in 2016.

In July 2017, Mr Harris announced he had obtained approval to move ahead with the legislation, which would provide for a “soft” opt-out system of consent for organ donation.

Under this system when a person dies, consent would be deemed to have been granted unless the person, while alive, registered their wish not to become an organ donor. The “soft’ element of it is that the next of kin will always be consulted before any organ is removed.

Under the current system, there is no presumption of consent. It is given only when the deceased has registered as an organ donor, or with the consent of the next of kin.

While pubic consultation began last summer, progress towards publishing the Bill had been slower than expected.

However, there has been renewed focus on the organ donation system in the past few weeks following the transmission of a documentary on the experience of writer and cystic fibrosis campaigner Orla Tinsley as she awaited, and then received, a double lung transplant in New York.

The Government has said in recent months it would have the Heads of the Bill (the draft legislation) ready this autumn.

In recent days Mr Harris said it would be published next month: “The Human Tissues Bill is a priority for me and I intend to be in a position to bring the general scheme of a Bill to Cabinet in October.

“The documentary last week on RTÉ reminded us how vital this piece of legislation is and how essential organ donation is. It also attaches a renewed vigour to our efforts to bring about legislative change in this area. I want to thank Orla Tinsley again for her bravery in continuing to document her own case and continuing to highlight this issue.”

Ireland remains one of a few EU countries not to have an opt-out system. The Bill will also regulate the removal, retention, storage, use and disposal of human tissue from deceased persons. It will also provide general conditions for the removal, donation and use of organs and tissues from the deceased and living persons of transplantation.

Prof Jim Egan of the Mater hospital, lead physician to the Irish National Lung Transplant Programme, welcomed the imminent publication of the Bill, and its provisions for a soft opt-out which would greatly benefit the availability of donor organs in Ireland.