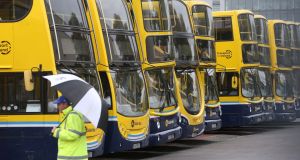 Dublin Bus managers are “firmly in the tent” for pushing through a controversial plan to overhaul the capital’s bus network, the board of the National Transport Authority (NTA) has been told.

Tim Gaston, director of public transport services at NTA, which is behind the BusConnects plan, also warned board members to be prepared for a “sustained campaign of criticism” against the proposals.

A presentation given to the board ahead of the plan being published in July states that this would include attacks on consultant Jarrett Walker, who headed the redesign, as an “American consultant who doesn’t understand Ireland”.

It said that should an offensive be launched on Mr Walker, the NTA should counter by calling “on other experienced experts” during the public consultation period.

The NTA hired John Barry, a recently retired head of bus planning at Transport for London, as another expert. He is “supportive and is assisting in implementation planning”, according to the briefing presentation, which outlines risks to the €2 billion plan and ways to “mitigate” them.

Asked about the presentation, an NTA spokeswoman said: “It would be normal business practise to present a risk analysis of activities like this.”

The NTA briefing, seen by The Irish Times, shows the authority was concerned about the threat of public protests receiving “disproportionate media coverage”. Those involved were told to be prepared to “respond to concerns before localised issues escalate”.

As part of a strategy to counter public opposition to the reforms, there was a further warning about the possibility of “unexpected opposition from stakeholders, political and others, that we anticipated would support the concepts, if not the detail”.

Minister for Transport Shane Ross told a residents’ association meeting in his constituency last week that he had nothing to do with BusConnects, no responsibility for the NTA and would be objecting to some aspects of it.

In the event of such a political reaction, the NTA presentation advised that staff “draw on Dublin Bus’s Network Direct experience to assist in planning stakeholder management”. Network Direct was a 2010 programme designed to save the company €12 million, which saw a number of routes amalgamated and led to protests in some areas.

The NTA briefing said: “It’s important to note that Dublin Bus management are ‘firmly in the tent’.”

It also warns about NTA resources being “overstretched” in pushing through the plan. This is an “ongoing risk”, which outsourcing and using “Dublin Bus experienced people” can mitigate against, “at least in the short term”.

Asked about the reference to Dublin Bus managers, an NTA spokesman said it was in response to concerns that BusConnects might threaten the State-owned company.

“The reference to them ‘being in the tent’ was simply a reassurance to the NTA board that Dublin Bus were supportive of the plan and that NTA and Dublin Bus were working closely together on the network review,” he said.