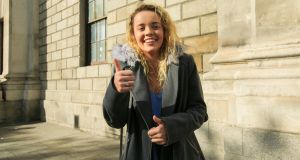 The State exams have been thrown into “chaos” following a High Court ruling in favour of a student whose points were wrongly totted up, according to education sources.

Wexford student Rebecca Carter has been allowed take up a place in veterinary medicine at UCD after the court directed the State Examinations Commission to correct her points tally by the end of this week.

Mr Justice Humphreys said the delay in processing her results was highly unfair and described the corrections process as “manifestly unfit for purpose”. He said the situation should not repeat itself next year.

The ruling has major implications for up to 5,000 students annually who appeal their results, as well as the timing of the State exams.

At present, students who appeal their grades do not receive the results of their appeals until mid-October.

The ruling means these students would need to have their results within weeks instead of months.

However, education sources say the current system is currently operating under severe strain and it is not possible to provide appeals results in time for the start of the new academic year.

In a statement last night, the State Examinations Commission did not say whether it would appeal the ruling.

“ The implications and ramifications of this will be considered by the board of the SEC at an early date,” it said.

The Department of Education said it had asked the commission’s board to report back on foot of its consideration.

One education source, who declined to be named, said the ramifications for the system were huge. “It would cause chaos. Either appeals would have to be processed within weeks, rather than months, at a time when teachers have gone back to school, or the exams are moved back earlier,” the source said.

The commission has already been struggling to hire teachers to work as correctors and was forced to hire non-teachers in some subjects.

Ms Carter, meanwhile, was celebrating the ruling, which means she is set to take up her place in UCD.

She had spent four days in the High Court listening to legal teams present evidence. After the ruling, she hugged family and friends in the courtroom.

Mr Justice Humphreys told her legal team he would direct the commission to carry out the necessary corrections to her exam paper by noon on Friday and notify UCD two hours later of the result.

Legal counsel for the commission had asked the court to consider a stay on its decision but the judge said to grant a stay would nullify his decision and allow Ms Carter no benefit from her successful legal challenge.

Mr Justice Humphreys had initially been told that UCD had agreed to reserve Ms Carter’s potential placing until September 30th.

The court heard Ms Carter had repeated her Leaving Certificate exams and had received 554 points, just six short of the required number for veterinary medicine at UCD.

The points required for the course had dropped to 555 in the second round offer, which had left her only a point short.

Ms Carter’s legal team said she was not satisfied that the result fairly reflected her exam performance and took part in a review in the presence of two teachers.

It was then discovered that her points total had been wrongly totted up and had the error not have occurred she would have surpassed the level required for the veterinary course.

Mr Justice Humphreys said an important factor in reaching his decision was that had the exam paper been correctly marked, Ms Carter would have had a prima facie case in winning a place at UCD.

He said he would hand down a written judgment later and adjourned the proceedings for mention on Tuesday afternoon.