With 16 camps across Myanmar and more planned, debate has grown around whether sanctuaries can solve the poaching problem 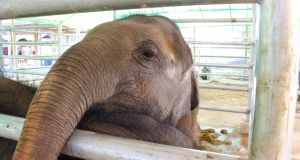 Seeing a group of elephant calves up close, eyes calm and trunks playfully sniffing the ground and each other, their lives seem nothing but serene. Since opening in November 2016, the Wingabaw elephant conservation camp 90 minutes north of Yangon, the largest city in Myanmar, has become home for six baby elephants and a number of adults. On duty this warm afternoon is U Myint Soe, a former employee at the state forestry department, and who spent years working with elephants in forestry logging operations.

“The camp opened both for tourism, and as a place to take care of the elephants,” he explains from a wooden bench outside the camp’s spartan cafe.

And care they need because these babies’ short lives have been anything but peaceful. They are orphans – castaways in an alarming and growing threat to Myanmar’s Asian elephant population; the killing and skinning of their adult folk.

While the plight facing elephants across Africa has attracted significant international condemnation, and rightly so, less reported is the surging demand for elephant skin in China that is fuelling a spike in elephant killings in Myanmar.

North and northeastern Myanmar share a 2,200km border with China in regions that are in places extremely remote and often beyond the control of the government. Myanmar’s Asian elephant population is critical: India aside, no country is home to as many.

Research published in March sheds light on just how precarious the future of these giants of the southeast Asian jungle has become. A telemetry study to map elephant movements in three regions and conducted over three years by researchers from Myanmar and the US and a French filmmaker found that seven of 19 elephants fitted with GPS collars were killed within a year.

Worse was to come. “Subsequent follow up of ground teams confirmed the human caused death or disappearance of at least 19 elephants, including the seven collared individuals, within a 35 km2 area in less than two years,” the study published in the journal PLOS ONE found.

“The carcasses of 40 additional elephants were found in areas located across south-central Myanmar once systematic surveys began by our team and collaborators.”

Local media quoting the ministry for natural resources and environmental conservation reported that while 18 elephants were killed by poachers countrywide in 2016, last year the number rose to 30. Experts put the figure even higher.

“The reason we started the GPS project was to learn how elephants were using the landscape so we could develop ways to mitigate some of this conflict,” says Christie Sampson, a fellow at the Smithsonian Conservation Biology Institute and a co-author of the study. “We have had some success in figuring out how elephants are moving in the landscape…but the big outcome of the GPS project is the discovery of just how many elephants are dying due to poaching.”

While farmers angered by elephants destroying crops and other local factors are responsible for some deaths – around half a dozen people are believed to be killed by elephants in Myanmar every year – poaching is the undisputed leading cause of elephant fatalities. Of the 133 state-recorded elephant deaths between 2010 and 2016, 61 were poached.

“The meat and skin are quickly moved across the border with China, indicating a connection with well-organised criminal groups and trafficking networks,” the study finds.

In China there is a growing market for elephant skin among people who believe that when ground up and mixed with other substances, including elephant fat, the skin has medicinal properties.

For two centuries elephants served as an invaluable resource in British-governed Burma. The country’s dense hardwood forests and jungle terrain made logging teak and other valuable timber with machinery impractical or costly, so elephants were drafted in and trained to move several tonne tree logs. In this environment elephants lived a semi-captive life: during daylight hours they hauled logs but at night were free to roam the surrounding forests.

But in 2014, Myanmar banned the export of raw lumber to help curb deforestation (all logging was temporarily banned for a year in 2016, and has restarted since). As a result, thousands of elephants found themselves unemployed, and left alone to wander forests, often where poachers lurk.

The explosion of poaching deaths has drawn action from the authorities. In February, Myanmar’s state forest department, along with local and international conservation agencies, launched an ambitious 10-year elephant conservation plan, and the issue of poaching reached the floor of Myanmar’s parliament the same month.

Back at the Wingabaw conservation camp, U Myint Soe tells how some loggers were lucky to find work tending to elephants in camps such as this. “A lot of people are hunting them in the wild, in the forests,” he says. “Some of the orphans were found by villagers in the Yoma-Bago lowland forest. One was just six weeks old.”

Staff say milk is served every two hours, and the calves consume 32 litres each a day. The cost per calf in milk alone is between €15 and €20 a day, keepers said; a major draw on the camp’s finances.

Mary, the smallest calf, arrived from the Ayeyarwady region in southwest Myanmar, a known elephant killing spot, early last year. Her mother was killed and partly skinned, and Mary is thought to have followed a herd of water buffalo to a nearby village where she was discovered by locals. As fragile as she still appears, others haven’t been as lucky: one infant, injured and too weak to drink, died shortly after arriving at the camp in December.

The six youngsters jostle and play together, much like children in a school yard might. But there’s a clear order of rank that works from the biggest down. When Yuyu Htay, the eldest calf, corners and bites Mary, the latter lets out an earth-shattering cry. Mary then stands alone for several minutes in the centre of the pen, seemingly traumatised. One can’t but help wonder if the trauma of her mother’s death is still on her mind. Yuyu Htay gets several clatters of a stick and a stern talking to by a young oozi – a handler responsible for the elephants.

The oozis working with the orphaned elephants are teenagers, and may spend the rest of their lives, day and night, with these graceful beasts. The facility appears well run if time-worn, and the relationship between oozi and elephant seems very closely bonded – Myanmar’s elephant husbandry, in fact, is lauded around the world.

But with 16 camps across Myanmar and many more planned, debate has grown around whether sanctuaries are the answer to the elephant poaching problem. A recently-opened “elephant lake” 180km north of Yangon is slated to be expanded into a 17,000-hectare sanctuary for 3,000 elephants. If it comes to fruition it would be the largest of its kind in southeast Asia.

Signs in English – but not Burmese – dot a highway north of Yangon warning: “Myanmar’s elephants will be gone by 2030. Don’t buy elephant products.”

Whether this awareness campaign is window-dressing for a foreign audience or a real sign that preserving Myanmar’s unique elephant heritage is a government priority remains to be seen.