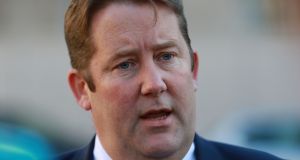 Minister for Housing Darragh O’Brien: said the report from the group would be discussed as part of Budget 2022. Photograph: Nick Bradshaw

A working group set up by the Department of Housing to examine the issue of Celtic tiger building defects is to establish the scale of the problem and what the potential cost of remediating the defects would be.

The group will come up with a traffic-light system to categorise and prioritise defects for remediation, with those threatening life and safety being prioritised.

Activist groups estimate that up to 92,000 apartments could be affected by legacy Celtic-tiger defects such as water ingress, insecure balconies and a lack of fire-stopping material.

An Irish Times investigation running since December 2018 has uncovered defects in 33 developments comprising more than 2,100 apartments in Ireland.

Owners have faced bills of up to €60,000 to remediate severe mould, collapsing roof canopies, rotting balconies and an extensive lack of fire-safety measures.

The terms of reference for the working group were discussed last week at a meeting between Minister for Housing Darragh O’Brien and officials from his department and the Construction Defects Alliance and Apartment Owners network.

Mr O’Brien said the agreement of the terms of reference for the group would be “a really important step forward to making a reality of a programme for government commitment”.

“We had a good meeting with stakeholders and we have pretty much agreed how to move forward,” he said.

Nature of the defects

The group will establish the nature of the defects, what caused them (whether design, workmanship or products used), the severity of them and the type of dwelling they affect.

It will look at establishing a central body to provide advice and support, and how remediation should be carried out – through individual units or owners’ management companies. Finally, it will establish the potential cost of remediating these defects and what financial solutions could be agreed.

Mr O’Brien said an important part of the process will be to find out the scale of the problem. The aim is to have a report from the working group before next summer and that would be discussed as part of Budget 2022, he added.

The Dublin Fingal TD denied there was a risk of exposing the State to an open-ended financial liability and that recommendations by the group for financial remediation would be looked at in a “structured way” with “no preconceived outcome”.

The State has traditionally been reticent to offer assistance to those affected by building defects, wary of the potential for an open-ended liability to emerge.

The working group will consist of seven members; an independent chairperson, a fire expert, a residential design expert, a lawyer, a building control representative and one nominee each from the Apartment Owners Network and Construction Defects Alliance.