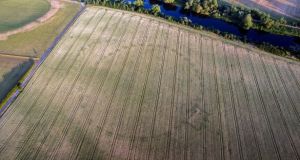 The National Monuments Service (NMS) received 66 reports of newly identified monuments during the months of July and August 2018, it has confirmed.

Many of the new reports relate “to features identified through crop-marks or scorch-marks which had become visible on account of the dry weather,” a spokesperson confirmed.

Among them was a previously unknown henge (a circle of stone uprights) near Newgrange in the Brú na Boinne Unesco World Heritage Site in Co Meath, found by Anthony Murphy using his drone. The discovery made international news headlines.

Among the other sites reported over the summer are a prehistoric barrow cemetery found in Redcow near Dundalk, Co Louth by Matthew Kelly who was trying to locate a site once described as Ireland’s Stonehenge.

Mr Kelly also took drone footage of two ringfort enclosures in the nearby Glebe and Lisdoo townlands and the NMS estimates the range of monuments recorded across all sites date from 2200 BC to 1000 AD.

The NMS said that the two ringfort enclosures “were not previously known” to it, although they were visible on aerial footage taken in 1995.

The sites reported by Mr Kelly in the Redcow townland were not previously known either and the NMS said, “these features probably represent a prehistoric barrow cemetery comprising up eight individual monuments with two of the eight features being classed as enclosures which might either represent features contemporary with the barrow cemetery or later settlement activity.”

It estimates that the barrows date from 2200 to 1900 BC while “the two newly identified ringforts referred to NMS by Mr Kelly in Glebe and Lisdoo are likely to date to the period 500-1000AD.”

Not the final figure

Mr Kelly, who is from Lahinch in Co Clare and chief technology officer with software company DroneSAR said, “I was inspired by Anthony Murphy’s find by drone at Newgrange due to the very dry weather, and so the very next day I went to Dundalk to see if I could also find any sign of a long lost monument discovered by antiquarian Thomas Wright in 1748 which he described as Ireland’s Stonehenge.”

“But by 1907 historian Henry Morris could not find any remains of the monument, it had disappeared. I (also) read about this monument in Anthony’s mythical Ireland blog a few years ago.

“I arrived at what I thought was the location of the Stonehenge monument outside Dundalk with my drone to look for any markings in the ground that might indicate the presence of this monument but I could not see anything. Before I landed the drone I decided I would do a 360 pan across the horizon and it was during this that I saw the circles in two different fields in the distance.”

“I found two large circular enclosures facing each other separated by a road and then at the other location where I thought there was just one circular enclosure there was actually eight in the same field. I remember the moment as the drone took off over the field and the many circles became visible. Between the two locations I found 10 previously unknown monuments.”

The NMS also said “reports are still being received, so this (66) should not be taken as a final figure for monuments newly reported in 2018.”

Meanwhile, Mr Murphy has confirmed that the henge he discovered, with Ken Williams, near Newgrange, will feature on Channel 4’s Hidden Britain by Drone which is presented by Sir Tony Robinson.

Mr Murphy travelled to London for the interview. He said, “the programme producers felt they couldn’t leave out what was (in their words) the biggest archaeological discovery of the summer,” from the programme.

It is being broadcast at 7pm this Sunday, September 9th.