May urges further sanctions on Moscow over Novichok attacks

Theresa May has revealed that the two suspects responsible for the Salisbury nerve agent attack were officers in the GRU, the Russian military intelligence service. Video: Parliament TV 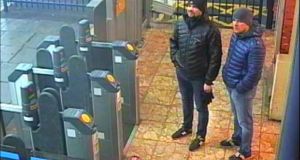 Alexander Petrov and Ruslan Boshirov are seen on CCTV at Salisbury Station on March 3rd, 2018 in an image handed out by the Metropolitan Police in London

Theresa May has called on the European Union to impose further sanctions on Moscow after British prosecutors named two Russian nationals as suspects in the poisoning of former spy Sergei Skripal and his daughter Yulia. Ms May said the two men, Alexander Petrov and Ruslan Boshirov, are officers from Russia’s military intelligence service, known as the GRU.

“The GRU is a highly disciplined organisation with a well-established chain of command. So this was not a rogue operation. It was almost certainly also approved outside the GRU at a senior level of the Russian state,” she told MPs.

Mr Skripal, a former colonel in the GRU, and his daughter fell ill in Salisbury on March 4th after they were poisoned with Novichok, a nerve agent. The prime minister said Mr Petrov and Mr Boshirov flew into Gatwick Airport from Moscow on March 2nd and stayed in London for two nights and that traces of Novichok were found in their hotel room.

They travelled to Salisbury the day after their arrival, apparently on a reconnaissance trip, and again on March 4th when police say they applied the Novichok to Mr Skripal’s front door. Police say they smuggled the nerve agent into Britain in a fake Nina Ricci perfume bottle which was found months later near Salisbury by Charlie Rowley and his partner Dawn Sturgess.

Mr Rowley and Ms Sturgess both fell ill and she died in hospital on July 8th.

The Crown Prosecution Service (CPS) said a police investigation had produced sufficient evidence to charge Mr Petrov and Mr Boshirov with conspiracy to murder, attempted murder, the use and possession of Novichok and causing grievous bodily harm.

“Prosecutors from CPS counter-terrorism division have considered the evidence and have concluded there is sufficient evidence to provide a realistic prospect of conviction and it is clearly in the public interest to charge Alexander Petrov and Ruslan Boshirov, who are Russian nationals,” said Sue Hemming, the CPS director of legal services.

After Britain offered evidence to allies earlier this year that Russia was behind the Salisbury attack, dozens of countries expelled more than 150 Russian intelligence officers. The EU agreed to set up a new chemical weapons sanctions regime but Ms May said yesterday that she wants Europe to follow Washington’s lead in imposing further sanctions targeting Vladimir Putin’s circle.

“We will also push for new EU sanctions regimes against those responsible for cyber-attacks and gross human rights violations – and for new listings under the existing regime against Russia,” she said.