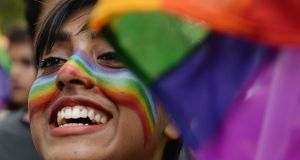 The court announced the verdict in Delhi drawing cheers from a crowd of LBGTI Indians and their supporters gathered on a lawn outside the building. File photograph:Arun Sankar/Getty Images 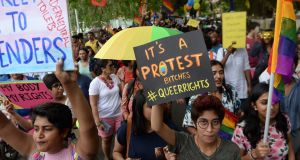 Indian supporters of the LGBTI+ community hold placards as they participate in a pride parade in Chennai in June. File photograph:Arun Sankar/Getty Images

India’s supreme court on Thursday scrapped a 157-year old colonial-era law banning gay sex that was punishable by a jail sentence of up to 10 years.

“Any consensual sexual relationship between two consenting adults – homosexuals, heterosexuals or lesbians – cannot be said to be unconstitutional,” he added.

Indu Malhotra, one of three women supreme court judges, said she believed “history owed an apology to LGBT people for ostracising them”.

The law against gay sex, known as Section 377, was introduced in 1861 during British rule and prohibited “carnal intercourse against the order of nature with any man, woman or animal” .

Even though it was rarely invoked when it involved consenting adults, Section 377 could be – and sometimes was – used as a means of harassment and blackmail.

Thursday’s ruling also overturns a 2013 judgment that upheld the colonial law. The court also ruled that discrimination on the basis of sexual orientation is a fundamental violation of rights.

Hundreds of LGBT activists outside the court in New Delhi cheered and some broke down in tears as the ruling was handed down. Others waved banners with slogans declaring “Gay and proud” and “I am who I am”.

“I’m so excited, I have no words,” said Debottam Saha, one of the petitioners in the case, adding that those in the LGBT community were no longer criminals.

But along with fellow petitioner Balachandran Ramiah, he too admitted it would take two or three decades for “societal attitudes” to change towards LGBTs.

Although public opinion in India’s bigger cities has favoured scrapping Section 377, there was strong opposition to it among religious groups and in conservative rural communities.

But one prominent BJP MP, the Harvard-educated Subramaniam Swamy, said homosexuality is not a normal thing and doing away with laws banning it cannot be celebrated.

“This verdict could give rise to other issues like an increase in the number of HIV cases,” Mr Swamy told CNN News 18.

Legal activists said the supreme court ruling is final and cannot be challenged, irrespective of the opposition to it from India’s inherently socially conservative population.

LGBT activists have fought long and hard to repeal Section 377 since 2001 and had a significant boost in 2009 when the Delhi high court ruled in favour of doing away with it.

But political, social and religious groups mobilised themselves to restore the draconian law and in 2013 the supreme court reinstated it.

Meanwhile, the supreme court said other aspects of Section 377 concerning unnatural sex with animals and children would remain in force.

1 California shuts down again as US coronavirus cases surge
2 US passengers fly into Dublin: ‘I’m here for six days. I guess I’ll have to stay inside’
3 Maureen Dowd: Biden has his limitations but he’s no Trump
4 Travel rules unlikely to include mandatory quarantine or cancelled flights
5 Covid-19: 200 to 250 people arriving in Ireland from US daily - Coveney
Real news has value SUBSCRIBE