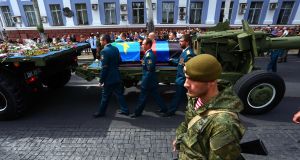 Russian-controlled separatists in eastern Ukraine have buried their leader, Alexander Zakharchenko, amid warnings from Moscow that his assassination further undermines efforts to end a four-year war.

Mr Zakharchenko (42) was blown up on Friday evening in a restaurant in Donetsk, in an attack that Moscow blamed on Ukrainian agents but Kiev described as just the latest murder of a Donbas-region warlord by Russia or local rivals.

A former mine electrician, Mr Zakharchenko joined pro-Russian militia in Donetsk in spring 2014, when Moscow seized Crimea and fomented violence in eastern Ukraine after the country’s Kremlin-backed leaders had fled revolutionary protests in Kiev.

He was placed in charge of the so-called Donetsk People’s Republic (DNR) in August 2014, as the Kremlin tried to depict the uprising as a local effort by replacing its erstwhile chiefs Alexander Borodai and Igor Girkin, two Moscow-based Russians.

Mr Zakharchenko and a bodyguard were killed, and 12 other people injured, when a bomb exploded as they entered a restaurant called Separ – short for “Separatist” – in central Donetsk.

Mourners in Donetsk on Sunday included senior Kremlin aide Vladislav Surkov, who said Mr Zakharchenko was “a cool guy, a real hero and that to be [his] friend was a great honour.”

Tens of thousands of people gathered in the city to bid farewell to Mr Zakharchenko, who was not a public figure before a war that has killed more than 10,300 people and displaced about 1.6 million. Ukrainian media said buses ferried mourners to the city, and public employees and students were obliged to attend.

Russian officials immediately pinned the killing on Kiev, while DNR claimed that several suspects had been arrested and that Ukrainian forces were preparing to attack the region under the guidance of Nato instructors.

Russian president Vladimir Putin blamed those who have “chosen the path of terror, violence, intimidation” and who “do not want to find a peaceful, political solution to the conflict ... but are placing a dangerous bet on destabilisation of the situation, so as to force the people of Donbas on to their knees. They will not succeed.”

Vyacheslav Volodin, the speaker of Russia’s lower house of parliament, said the murder “nullifies the meaning” of the Minsk agreements, deals signed in 2015 that lay out steps towards a final peace agreement for Donbas.

Russian foreign minister Sergei Lavrov called the killing “a provocation by Ukraine, clearly aimed at stopping the implementation of Minsk agreements”, which makes international talks on the war “impossible” at the moment.

Moscow and the separatists have blamed Ukrainian agents for the grisly death of several other Donbas warlords far from the front line, without offering any evidence or appearing to catch the perpetrators.

Vasyl Hrytsak, the head of Ukraine’s SBU security service, said Mr Zakharchenko had been killed by Russia to eliminate those who knew too much about its role in Donbas, or in a local struggle over money and power.

Mr Girkin told Bloomberg: “He could have been taken out because of criminal schemes or maybe his Kremlin curators grew tired of him or the Ukrainians may have done it.”