Seamus Darby, the man who scored ‘that’ goal, to release his autobiography 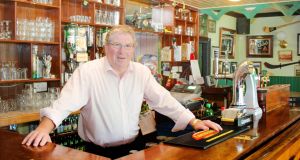 Seamus Darby, the man who scored the most famous goal in the history of Gaelic football, has already been the subject of radio and television documentaries.

Darby was a 31-year-old substitute when he came on against Kerry six minutes before the end of the 1982 all-Ireland football final. Kerry were winning by two points and on the verge of the five-in-a-row when Kerry full-back Tommy Doyle misjudged the flight of the ball, or was he pushed?

Darby, lurking behind, expertly gathered the ball and planted it beyond Kerry goalkeeper Charlie Nelligan. There were just two minutes left. Offaly won by a point.

Darby’s life after that goal is equally fascinating. It has been the subject of an RTÉ radio documentary, Seamus Darby and the Goal That Made Champions, first broadcast in 2015 and a television documentary as part of the TG4 Laochra Gael series broadcast earlier this year.

Now, he will get to tell his story in his own words. He has titled his autobiography, About That Goal. The irony of the title is not lost on him as he says he frequently gets “pissed off, of course you would” when he is reminded of it. This happens almost every day of his life since the game happened 37 years ago.

He says the timing of the book’s release, with Dublin on the verge of a historic five-in-a-row, is not coincidental.

“People were on to me about writing a book and I was conscious with the five-in-a-row . . . it’s now or never,” he say. The book is co-written with Offaly-based journalist PJ Cunningham.

After the goal Seamus Darby was feted from one end of the county to the other. During the recession of the 1980s he lost his business in Edenderry. This was followed by his marriage breakdown and he was forced at the age of 40 to emigrate to London, where he managed several pubs.

He returned to Ireland in 2002 and bought the Greyhound Pub in Toomevara, Co Tipperary, which he still runs. Four years ago he was diagnosed with prostate cancer. He is now free of cancer, but three months ago he was involved in a traffic collision outside Tullamore and he sustained serious leg injuries.

He has a ticket for Sunday’s final between Dublin and Kerry.

“I don’t know if I am going to be going. I had a bad car crash and I’m still very broken up. I was nearly killed. I had a few health issues and they cleared up. This thing happened out of the blue. This is where I am at.

“We were in a different situation. Kerry are one of the teams that didn’t get five-in-a-row and now they have a chance of keeping their own record intact. There will be a fair bit of pressure on them too.”