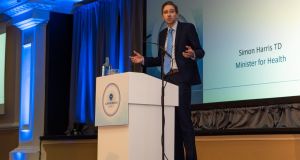 Mr Harris said in a speech at the ClearChoice Mental Health and Well-Being Summit in Saggart, Co Dublin, that mental health difficulties caused a 3 per cent decrease in Ireland’s GDP.

“If we said Brexit was going to shrink the Irish economy by 3 per cent, we’d be having wall-to-wall coverage,” Mr Harris said.

The conference for financial planning professionals centred on how financial struggles can lead to mental difficulties – and vice-versa – often forcing people into a vicious cycle that can be challenging to escape.

At any given time, Mr Harris said, 6.3 per cent of Irish people are struggling with an anxiety disorder, one of the highest rates in the world.

However, he highlighted the increasing recognition of the “clear link” between financial stress and mental health difficulties as a sign of real progress.

“It is particularly encouraging to see the financial industry acknowledging the impact of financial matters on mental health,” Mr Harris said.

Stress, anxiety and depression are the second leading cause of work-related illness as reported by workers, according to Mr Harris, and 18 per cent of workplace absences in Ireland every year are from mental health conditions.

The Minister said the growing trend of remote working was having a profound impact as well. It removes face-to-face contact and creates a barrier for employers to assess the mental health of their employee, he said, while becoming increasingly isolated can make it more difficult for people to reach out for help.

“I genuinely, strongly and passionately believe that we should be putting the bulk of our focus on trying to keep people well in the first place.”

Acknowledging that Ireland has a history where people were “at best ignored and at worst ostracised”, he said he was was optimistic that Ireland was “fast becoming a country where acceptance is the norm”.