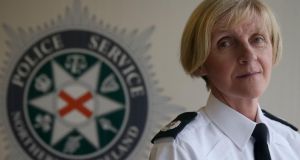 PSNI assistant chief constable Barbara Gray: ‘We will be prepared and we will be very ready for any potential upsurge in violence that may happen after Brexit.’ Photograph: Brian Lawless/PA Wire

A no-deal Brexit could prompt a year-long upsurge in dissident republican support in Northern Ireland, a senior police commander has said.

The assistant chief constable Barbara Gray, who heads up the counter-terrorism response unit for the Police Service of Northern Ireland (PSNI), warned Brexit could become a motivating factor for extremists in the event of a disorderly exit.

“We will be prepared and we will be very ready for any potential upsurge in violence that may happen after Brexit,” she told the PA news agency. “We predict that a six- to 12-month period, if there’s a no-deal Brexit, that there could be an upsurge in violence.”

Ms Gray said anxiety levels had risen since Boris Johnson became prime minister promising to leave the UK “do or die” with or without a deal.

She said: “I think in the last few weeks, probably since the new cabinet, the new PM and his announcements [on the exit date] that ‘this is October 31, this is what we’re looking at’, I think generally you can almost feel at bit of anxiety rising across society.”

Ms Gray added: “Anything that brings the border issue into question in Northern Ireland brings tension.

“Overall, our assessment would be that we would be concerned for a six- to 12-month timeframe there would be some sort of upsurge in support for dissident republican groupings and activities.”

It is the third recent warning from senior police on the island over the impact of a no-deal Brexit.

Simon Byrne, the new chief constable of the PSNI, warned Brexit could become a “trigger and a fuelling point” for more people to join extremist groups. Last week, the former deputy head of the PSNI Drew Harrison who is now the Garda commissioner in the Republic of Ireland, warned that six decades of cooperation in law enforcement across Europe would “fall away” after Brexit.

However, Ms Gray said it was too simplistic to attribute the recent spate of dissident violence to Brexit.

As well as several recent attacks, one of which resulted in the killing of the journalist Lyra McKee in April, Ms Gray revealed that 10 other murder attempts have been foiled in the last two years.

Dissident republicans have been energised by their murder of McKee, enjoying the publicity the killing generated, she said claiming the the New IRA derived “sick and sad” pleasure in the reaction to the shooting, motivating them to intensify their activities in the region.

The PSNI is attempting to combat the threat from several dissident groupings. The New IRA is the largest but a recent bomb blast in County Fermanagh blamed on the Continuity IRA demonstrated the threat still posed by that group.

Ms Gray said policing the Border in significant numbers to support any checks or controls that might be required in a no-deal scenario would bring risks for officers.

“If questions of the Border are being brought into play that does bring with it pressures,” she said.

“If we as a police service have to at times maybe support other enforcement agencies – could be agriculture or whatever else – that does bring us into the picture probably in a different style and tone than we have been policing around border areas for many years now.” – Guardian News and Media 2019