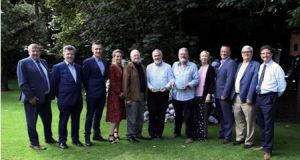 Jim Walsh and William Hammond (centre in light blue shirts) have been organising the Cork Folk Festival on a voluntary basis over the last 40 years. Photograph: Tony O’Connell photography

It was the year of the Pope’s visit, Maggie Thatcher becoming British Prime Minister and the Boomtown Rats making No 1 in the UK Charts with Rat Trap and all the while a group of folk fans on Leeside were sitting down planning to set up the Cork Folk Festival - welcome to 1979.

Four decades on, two of those who have been instrumental in keeping the Cork Folk Festival alive, festival co-directors, Jim Walsh and William ‘Hammy’ Hammond have been honoured for their efforts by being named Cork Persons of the Month for August.

Cork Person Awards organiser, Manus O’Callaghan paid tribute to Jim Walsh and Hammy Hammond, pointing out that between them, the duo have been organising the festival on a voluntary basis for well over 40 years.

“Thanks to the tireless work of Jim and Hammy, The Cork Folk Festival has become an integral part of our county’s culture. Their dedication to the festival embodies the Corkonian spirit, and allows Cork to compete with other folk festivals and events at an international level.”

“The festival celebrates and showcases the indigenous music, song, dance and folklore of Cork, embracing the rich cultural heritage of the Muskerry Gaeltacht and Sliabh Luachra and, for a few days each year, transforms the city and county into a hub for folk and traditional music.”

Jim Walsh thanked Mr O’Callaghan and others involved in the Cork Person Awards scheme for honouring Hammy and himself but said that it really was more a reflection of how important the Cork Folk Festival had become in the life of Cork city and county.

“The Cork Folk Festival is one of the highlights of my social calendar, showcasing only the best of Irish and international talent and being recognised by this award is a clear indication of what our hard work and dedication to the festival means to the people of Cork. “

Hammy Hammond recalled the origins of the festival when folk fan, Malachy Daly - who had been involved in running the Cork Folk Club in Douglas GAA club with the late Timmy the Brit McCarthy - returned from attending the Dublin Folk Festival in 1978.

“The idea came from Malachy who came back from Dublin with the joys of all the great music and was talking to Tom Dineen who said ‘Why don’t you run one in Cork? so they spoke to Timmy, Jim Walsh, Noel Shine and others in the club and they pulled a programme together.”

Hammy revealed that the template that they used for the 1979 Cork Folk Festival - headlined by De Danann - has stood the test of time ever since before revealing that this year’s festival will see many of the original artists from 1979 return to play the festival again.

“It’s a sort of celebration - we have quite a lot who played at the first festival - Martin Carty was due to play the first but had to cry off when he got sick so Freddie White replaced him and both are appearing this year while we also have Arty McGlynn and Nollaig Casey, ” he said.

“We have Jimmy Crowley who was there at the start - he’s teaming up with John Spillane - and we have Noel Shine with Greenshine, Mick Daly from the Lee Valley String Band, Ray Barron from Two Time Polka and Jackie Daly and Matt Crannitch who were also there that first year.

“And we also have Andy Irvine who’s been a great friend to the festival over the years while we also Zoë Conway, Mairtín O’ Connor and Donal Lunny and Iarla Ó Lionáird from the Gloaming with Steve Cooney and Niall Toner and his band - we’ve about 200 musicians playing overall.”

For further information on this year’s 40th Cork Folk Festival which runs from October 3rd to 6th, please visit www.corkfolkfestival.com