DUP gives Bill a cautious welcome, and has called on the UK government to go further 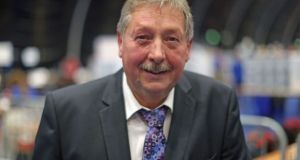 Sammy Wilson: “I am pleased that the government is open to changes, but we will judge the legislation on its impact rather than the headlines and speculation”

Pro-Remain parties in Northern Ireland emphasised on Tuesday that they would oppose any attempt to undermine the Brexit withdrawal agreement following the admission by the North’s Secretary Brandon Lewis that he expected the UK would “break international law” by introducing a bill which would change part of the deal.

However, the DUP – which is opposed to the deal because it effectively places a border in the Irish Sea – gave the bill a cautious welcome. The party said, however, that it needed to see the detail of what was being proposed, and has called on the UK government to go further.

“I am pleased that the government is open to changes, but we will judge the legislation on its impact rather than the headlines and speculation,” said DUP MP Sammy Wilson in a statement.

Facing questions from MPs in the House of Commons on Tuesday, Mr Lewis told MPs any breaches would be in a “very specific and limited way”, and would allow the UK to deliver on its commitment “to legislate for unfettered access – something Northern Ireland businesses have consistently asked us to do – and to ensure that we deliver certainty”.

However, SDLP leader Colum Eastwood said Mr Lewis’s statement had both undermined the UK government’s international credibility and its reputation in Northern Ireland.

“Their stock is pretty low anyway with people in the North, but I think you really lose something as a government when nobody can believe anything that you’re saying, and think that’s the scenario they’re in.

“They say they want to do trade deals around the world, but who would even enter into negotiation with them if they’re prepared to just rip up any agreements that they’ve made with people who are supposed to be their friends?”

The SDLP, he said, would oppose the plans, adding that it was “important to stay calm and we try to make sure there is an agreement” on a Brexit trade deal.

The Alliance Party’s deputy leader, Stephen Farry, said Mr Lewis’s statement was an “extraordinary state of affairs”, and described the legislation as a “major test” requiring MPs to “take a stand” against it in parliament.

However, if the government continued to “pursue this route I struggle to see how they’re going to conclude a deal with the European Union”.

Sinn Féin also expressed its lack of confidence in Mr Lewis’s words, describing the British government as “engaged in a high-wire act on Brexit” and conspiring “to remove the only safety net there is”.

The withdrawal agreement, Chris Hazzard said, was an “international agreement and it must be maintained and protected in order to protect our economy and our peace agreements”.

Ulster Unionist leader Steve Aiken said his party would wait to see the legislation before commenting.