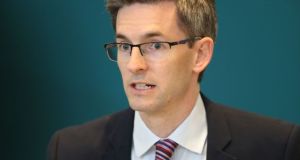 A further 307 confirmed cases of Covid-19 have been notified to the National Public Health Emergency Team (NPHET), it said on Tuesday evening.

This brings to 30,080 the total number of cases of the disease in the Republic.

One further death was reported, bringing the total number of deaths to 1,778.

The latest figures were released just hours after the Cabinet decided to reopen “wet” pubs from September 21st in a move that has raised eyebrows among public health experts.

“I’m surprised at the decision, given the case numbers are creeping up and the chief medical officer is warning people in Dublin and Limerick to be specially vigilant,” says Prof Ivan Perry, dean of the school of public health in University College Cork.

“I’m sceptical too. Now is not the time to be opening pubs. Given the close contact, the noise, the indoor environs, the loss of inhibition with alcohol - the general hubbub - they are ideal places for the virus to flourish.”

Dr Tomas Ryan of the school of biochemistry and immunology at Trinity College Dublin said he could not understand the rationale behind the Government’s decision, “even if case numbers aren’t currently rising”.

“We’re opening three things at the same time - schools, colleges and now pubs - so it’s going to be very hard to disentangle trends, to tell what action caused what rise in cases.”

On Tuesday, acting chief medical officer Dr Ronan Glynn again highlighted the rising number of cases in Dublin, with more than half of the latest cases being recorded in the county.

He said: “182 of today’s cases are located in Dublin and at least 44 of these are associated with community transmission.

“I urge everyone to follow the public health advice and keep your distance. Do not underestimate the risks associated with any of your interactions, including with your family, friends or work colleagues. Now is not a time to let down your guard – assume that you or those that you meet may be infectious and act accordingly.”

Of the confirmed cases, 160 were men and 146 were women, while 73 per cent were recorded in people under 45 years of age.

Some 64 per cent of cases are confirmed to be associated with outbreaks or are close contacts of a confirmed case, while 72 cases have been identified as community transmission.

In terms of other counties, 25 cases were in Kildare, 19 were in Limerick, and 15 were reported in both Wexford and Louth.

The HSE said it was working to identify any contacts the patients may have had to provide them with information and advice to prevent further spread.

In Northern Ireland, two more people have died from Covid-19, the North’s department of health reported.

It brings the total number of fatalities recorded by the department to 567.

Forty new cases of Covid-19 were identified in the North, with a total of 624 in the last week. The number of cases since the outbreak began now stands at 7,908 in Northern Ireland.

It follows reports from a number of people, including the Sinn Féin MLA Pat Sheehan, that they had been offered an appointment in Scotland when they tried to book a test.

Mr Sheehan had tried to make an appointment for his daughter, but was told his nearest test centre was in Stranraer.

Mr Swann clarified the situation on Tuesday, saying that “nobody in Northern Ireland was expected to travel outside the jurisdiction for a test.

“These slots have been offered by the online system because it has not on occasions recognised local requirements. The same problem has been reported in Scotland,” he said.

“I want to see this glitch resolved as a priority.”

Earlier, figures from the European Centre for Disease Control showed the incidence of Covid-19 in Ireland had dropped below that of the UK.

The ECDC data lag slightly behind Irish figures, which have increased in recent days.

Spain, the worst-affected country in Europe, continues to suffer a surge in cases with incidence rising from 240.6 to 255.9 in the space of a day.

In Ireland, four counties have an incidence of 57-60 cases per 100,000 population - Dublin, Kildare, Tipperary and Limerick, according to the HSE’s Health Protection Surveillance Centre.

Within Dublin, the highest incidence is now in Dublin South-East, at 69.5.

Of 1,672 cases in the past fortnight, 55 were hospitalised. The only patient admitted to ICU was a child aged under five.

Meanwhile, there are 48 confirmed cases in hospitals, including six in intensive care units, according to the Health Service Executive.

The Irish Medical Organisation says there has been a surge in the number of children attending GPs for assessment for possible Covid-19.