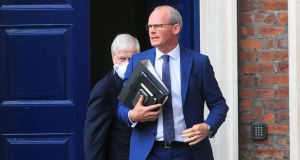 There will be ‘no appeasing’ any unilateral departure by the UK from the terms of the Brexit withdrawal agreement, Minister for Foreign Affairs Simon Coveney said. File image: Gareth Chaney/Collins

Any unilateral departure by the UK from the terms of the Brexit withdrawal agreement could seriously erode and damage political trust not only in the negotiations but within Northern Ireland at a time of extreme sensitivity, Simon Coveney has said.

Such a move would be a matter of “considerable concern and a very serious step”, the Minister for Foreign Affairs told the Dáil.

He insisted there would be “no appeasing” of any approach to breach international law and it was the “least” they could expect that the UK would adhere to its legally binding commitments.

He added, however, that “we need to remain calm and focused” on the “real prize” to get a deal to avoid tariffs and not on this “hugely distracting” approach which was illegal.

He told the Dáil that “the UK has a long and proud tradition of upholding international law and advocating for the primacy of the rule of law. Any departure from this tradition would have serious implications, not least for the UK’s international reputation.

“Clearly any unilateral departure from the terms of the withdrawal agreement would be a matter of considerable concern, and a very serious step. Our view is that such a departure could seriously erode and damage political trust, not only in the negotiations but within Northern Ireland at a time of extreme sensitivity.”

Mr Coveney was responding to “gravely concerning” reports that the UK government planned legislation which could undermine key elements of the EU-UK withdrawal agreement.

Mr Coveney stressed: “The protocol agreed as part of the withdrawal agreement is designed to operate in all circumstances, including in the absence of an agreement on the future relationship between the EU and the UK.

“The protocol represents a fair and balanced outcome for all parties, with compromises on all sides, and we trust and expect that the UK Government will implement it in full respect of its international obligations.”

He added the UK’s approach was a “really unwelcome distraction” which was “hugely problematic and illegal”.

Mr Coveney said: “While we still await publication of the legislation, earlier this week we raised media reports and briefings on this issue with the UK through diplomatic and official channels. We expressed our concern at these reports.

“My concerns have been exacerbated by the additional comments deliberately made in the House of Commons today openly committing the UK government to break international law.”

He said EU negotiator Michel Barnier would raise them with UK foreign secretary David Frost during their engagement on the future relationship negotiations.

Sinn Féin TD Ruairí O Murchú said it was unacceptable the British government had missed every deadline on Brexit while party colleague John Brady asked why the Taoiseach had not “lifted the phone” to British prime minister Boris Johnson.

Mr Coveney said that progress on future partnership “is inextricably linked to the full implementation of the withdrawal agreement, a legally binding international agreement between the EU and the UK, of which the Protocol on Ireland/Northern Ireland is a central component”.

He added: “We and the EU will continue to take a calm and measured approach, as we are in the ongoing future relationship negotiations. Together we will carefully analyse the detail of the legislation in question once it is published and remain in close contact with the EU taskforce on this critical issue.”