Man (70) dies after crash with lorry on M50 motorway

The incident occurred just before 3pm on Tuesday afternoon 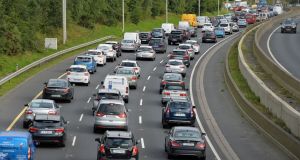 A 70-year-old man has died following a fatal road traffic collision between a car and a lorry on the M50 motorway on Tuesday afternoon.

Emergency services attended the scene of a fatal road traffic collision on the M50 southbound between junction 12 Firhouse and junction 13 Ballinteer, which occurred at approximately 2.50pm.

A male driver was pronounced dead and forensic collision investigators went to the scene. The lorry driver was uninjured.

One lane of traffic remains currently closed southbound, as a result of the collision.

According to AA Roadwatch, there were “very long queues” in both directions approaching the serious collision between J12 Firhouse and J13 Ballinteer.

The traffic and road monitor had advised commuters to “take care on this stretch” of road on Tuesday evening.

There were also delays on some surrounding routes as a result of the collision, AA Roadwatch said, especially approaching Ballyboden on the Ballyroan Rd and Ballyboden Rd, which is also backing up traffic on Butterfield Avenue from Rathfarnham.

Dublin Fire Brigade advised commuters to avoid the area, if possible, and to use alternative routes.

“Severe delays on M50 J12 Firhouse - J13 Ballinteer Southbound as we attend a serious collision. One lane currently closed. Avoid if possible,” they said in a tweet.

Gardaí are appealing for witnesses to come forward with camera footage and contact Rathfarnham Garda Station 01 666 6500, the Garda Confidential Line 1800 666 111 or any Garda station.