Brexit: Irish firms are warned of risks to jobs and movement of goods 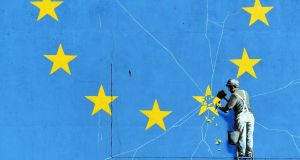 A Brexit-inspired mural by Banksy in Dover. Photograph: Neil Hall/EPA

Businesses face losing access to trade with Britain and significant delays in moving goods in the case of a Brexit worst-case scenario, the Government has warned.

A new Brexit Readiness Action Plan, which will be published on Wednesday, outlines a series of risks to commercial and consumer life in Ireland, including delays at English ports, the risk to jobs from trade disruption and regional impacts for the most exposed sectors.

There is also a risk to daily life, with potential repercussions for online retail, financial shopping and the exchange of personal data, the plan will warn, alongside serious issues for trade if access to the “land bridge” through Britain is lost.

“The key message is that there is still time for businesses to prepare but they do need to prepare,” a Government spokesman said.

It comes after Minister for Foreign Affairs Simon Coveney told the Dáil on Tuesday that any unilateral departure by the UK from the terms of the Brexit withdrawal agreement could seriously erode and damage political trust. Mr Coveney said any such move would be a matter of “considerable concern and a very serious step”.

Earlier on Tuesday, Northern Ireland secretary Brandon Lewis said he expected the UK would “break international law” with its proposals to change how the withdrawal agreement with the European Union operated. He said it would be in a “very specific and limited way”, adding there were “clear precedents” for the action.

Mr Coveney said his concerns had been “exacerbated” by the comments.

A Government spokesman said the end of the transition period, which expires at the end of 2020, would “bring substantial and lasting change”, regardless of the outcome of negotiations. Brexit would have “profound and immediate implications for every business that moves goods to, from or through Britain,” a spokesman said.

“Time is short and action is required now. Businesses must take steps now to understand what these changes are and assess their impact.”

The plan is expected to outline progress made on the upgrading of port facilities to date, and the intensification of engagements with State agencies and exporting and haulage sectors in the period ahead.

Government sources indicated that further supports would be needed for the agri-food sector specifically in the event of a no-deal Brexit.

“Irish businesses trading with Britain or using the UK land bridge need to intensify their preparations for January 1st,” the spokesman said.

“In the worst-case scenario, the new rules will prevent them from trading with Britain or could lead to significant delays in moving goods.” He added that the Government recognised that preparing for the changes ahead would be extremely challenging for firms already severely affected by the Covid-19 pandemic.

“[The Government] will try to support them as much as possible over the coming months.” Businesses are being encouraged to avail of supports already in place “as a matter of urgency if they have not already done so”.