Discrepancies in the way grades were lowered raises some urgent questions 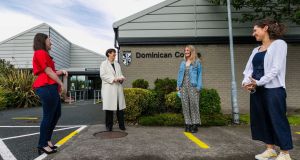 The Irish Times helpdesk has received a steady stream of questions from students who are deeply disappointed with their calculated grades.

Many students are shocked to discover that, under the agreed process for assessed grades, there is no mechanism to review either the initial percentage mark awarded by their teacher, or the ranking place the teacher allocated to them within the class.

Many of these students attended high-achieving schools, among them sizable numbers who attended privately-managed grind schools.

In the case of St Kilian’s Deutsche Schule in Dublin, the case raises some troubling questions over whether all schools have been treated fairly.

While the school expected half of its students to secure a H1 in German based on past performance, just 14 per cent secured this grade under the new calculated grades process.

These claims might be easily dismissed in another school – but given its track record of excellence in German, it raise questions about whether the Department of Education’s standardisation process was nuanced enough to pick up these trends at individual school level.

As for many grind schools and other private schools, some also claim that teachers’ estimated grades were lowered by anywhere between 20 to 40 per cent, well in excess of the national average of 17 per cent.

The fact that the Department of Education, following a Government decision , withdrew the “school profiling” data relating to the previous performance of schools over the past three years from the algorithm used to determine the final grades allocated to each student may also have played a role in flattening the curve of achievement.

By contrast, it may have benefited students in schools with less of a tradition of securing high grades for their students, and thus offers of places in high points courses. We don’t know yet for sure.

Of course, it may also be the case that teachers in these schools overestimated their students to an extent far higher than elsewhere and, as a result, more of their estimated grades were pulled downwards.

This controversy also raises the wider question of perception of school performances. Students may expect stellar results from prestigious schools, but it isn’t always the case.

For example, The Irish Times provides detailed data every year on the numbers progressing to college from all schools. Many of these schools have what appear to be 100 per cent progression rates. However, we make it absolutely clear that these numbers can be inflated by students repeating or reapplying to college. For statistical reasons, outside of our control, they are all included as being in the same class.

(We would love to be in a position to publish the actual numbers of the current Leaving Cert class who progress to college. But under legislation, the national media is not provided with this data.)

So, there can be a misperception among both parents and students that all students from prestigious schools are guaranteed to secure high-points courses every year. Many do not and this is accepted.

But in the current scenario, where an algorithm is perceived to be determining the outcome, such acceptance is absent. This may be one of the reasons why our helpline is getting so many calls from students from these backgrounds.

No algorithm was ever going to be able to provide an outcome which kept everyone happy, but the level of unhappiness among those with high expectations is very evident, and is being communicated by parents to their public representatives and possibly legal advisors.

Minister for Higher Education Simon Harris was at pains to point out that everything possible is being done to maximise the number of places available for the CAO distribution on Friday.

Whether those additional places will be enough to take the heat out of the anger and upset of the students and parents involved, only time will tell.