San Francisco honours McGuinness for ‘courageous service in the military’ 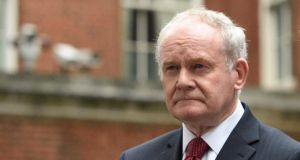 Martin McGuinness died in 2017 at the age of 66. Photograph: Facundo Arrizabalaga/EPA

Martin McGuinness has been posthumously awarded by the City of San Francisco for his “courageous service in the military”.

The certificate of honour was issued by San Francisco on Friday and is the American equivalent of the freedom of the city.

The certificate is signed by the Democratic mayor of San Francisco London Breed.

Ms Breed signed the parchment “on the national day of Ireland” though St Patrick’s Day is a week away.

It praises Mr McGuinness’s role in the Northern Ireland peace process and in the Good Friday Agreement.

Mr McGuinness was deputy first minister in the now defunct Stormont executive from 2007 to 2017.

It states: “Martin’s courageous service in the military and as a negotiator helped cement and shape the Northern Ireland peace process and construct the Good Friday Agreement.

“His sacrifice and dedication to secure peace for his people is not only an inspiration to us all, but represents San Francisco values at their best. He leaves a legacy that embodies and celebrates the diverse history and strength of San Francisco and Ireland.”

Mr McGuinness died in 2017 at the age of 66. Unlike Sinn Féin president Gerry Adams, he never denied being in the IRA.

He was second-in-command of the IRA in Derry on Bloody Sunday.

Mr McGuinness’s headstone was unveiled at the republican plot at Derry City Cemetery on Easter Sunday 2017.

It acknowledges his IRA past. 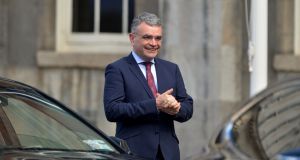