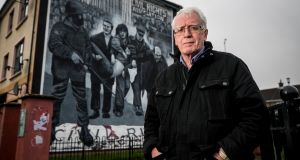 Jean Hegarty is the living embodiment of the truth in the saying that a lie can be half-way around the world while the truth is still putting on its shoes.

Hegarty, with some trepidation, is waiting for Thursday’s announcement in Derry by the North’s Public Prosecution Service (PPS) as to whether or not any former British soldiers will be charged with the Bloody Sunday killings.

Most particularly she will learn if anyone will be prosecuted for the killing of her then 17-year-old “pesky” brother, Kevin McElhinney.

She was 23, a mother of one child, married to a Derry man and living in Toronto at the time of Bloody Sunday on January 30th, 1972.

In Canada that Sunday, she watched the six o’clock news which, she recalls, reported how “gunmen and bombers” had been killed by the British army that afternoon.

The Saville Inquiry found Jean's brother was shot dead by 'Soldier L', who is dead, or by 'Soldier M' – all the implicated soldiers were granted and still have anonymity

“So, the first feeling was of relief because I did not know any gunmen or bombers,” she said.

She went to bed that night sad and shocked about the killings but comfortable that no one in her family was on the list of the dead. “The immediate concern about your own family was gone . . . but unfortunately that wasn’t true.”

The following morning she learned the terrible news, her brother was not only dead but labelled as an IRA bomber or gunman. That was a falsehood she is sure her neighbours in Canada believed up until the publication of the Saville report in 2010.

She returned to Derry for the funerals but her memories of that time are hazy. “I remember some things quite clearly; others are a complete blur, particularly about the funerals.”

Lord Saville’s report into Bloody Sunday found those killed and injured during the civil rights demonstration were innocent; that the killings were unjustified and those killed posed no threat. It overturned the first discredited report into the killings, by Lord Widgery in 1972, which said British soldiers were fired on first and some of those killed had been armed.

The Saville Inquiry found that with the probable exception of Gerald Donaghey, none of the 14 killed – a 14th victim, John Johnston, died in June 1972 – or the 14 wounded, was armed. Donaghey’s family claimed nailbombs were planted on his clothes after he was shot dead.

The Saville report was a huge relief, a lifting of a great burden for all the families, says Hegarty. “Saville did not change the fact that nothing is bringing your brother back. But to have their names cleared, to have newspaper reporters from all around the world in Derry to dispel the lies that I believed when I heard them first that Sunday night in Canada, that was so important.”

With a chuckle she describes her brother as a “pesky kid with a turn in his eye” who, when she was dating as a 19 year-old, she had to bribe to give her space with her boyfriend.

The Saville Inquiry found that her brother was shot dead by “Soldier L”, who is dead, or by “Soldier M” – all the implicated soldiers were granted and still have anonymity. “It is important for me that whatever evidence there is, is taken to whatever conclusion there should be,” says Hegarty.

Hegarty, who returned with her family to live in Derry in the mid-1990s, does “not particularly” want people to go to jail, but says it is “important that the rule of law is followed and that consequences follow”.

On the issue of punishment there are different views among the families. Some want the full impact of the law to be visited on the former soldiers, others would be satisfied with reduced sentences in the event of any successful prosecutions, others want no prosecutions at all.

Several British politicians, particularly Conservatives, and British soldier veterans’ representatives, complain of a “witch-hunt” and demand an effective amnesty for the ex-soldiers.

We felt a deep emotion that day; four families seeing the killer of their loved one for the very first time. It was like hell listening to what he said and didn’t say

Since the 2010 report, five of the former soldiers have died. The PPS on Thursday will disclose how many, if any, of the 17 surviving former soldiers, most aged in their 60s and 70s, will be prosecuted. It will also pronounce on the two former members of the Official IRA who fired a number of shots on Bloody Sunday.

The PPS decision, whatever it is, is likely to prompt anger and resentment, whether from families or former British soldiers, their representatives and Tory politicians – and possibly from both sides.

The announcement is also happening in the week of an important Brexit vote, or votes in Westminster, and while obviously there is no direct link between the UK exiting the EU and Bloody Sunday, both issues can inflame emotions, and who knows what will be the result of the mingling of these volatile matters.

It could all feed into the current problematic state of British-Irish relations. That situation is exacerbated by the row last week over Northern Secretary Karen Bradley saying that all killings by the British army and police during the Troubles were “not crimes”.

Under pressure she apologised, but coming ahead of the PPS’s Bloody Sunday decisions, and while a Belfast inquest is examining how British soldiers allegedly were responsible for 11 deaths in Ballymurphy in west Belfast in 1971, it further stirred the toxic political mix.

John Kelly, who deplored Bradley’s comments, says even after the liberation of the Saville report he is still carrying a lot of anger in his heart over the death of his brother Michael, who was 17 when he was shot dead on Bloody Sunday. “I am hoping that if there are prosecutions that it will lift the anger from us and people can get on with the rest of their lives,” he says.

“Soldier F” is in the frame for his brother’s killing and for three other killings that day, of father of six Paddy Doherty (31); Barney McGuigan (41), also a father of six children; and William McKinney (27), who was engaged to be married. The former soldier has said that he only fired at people with bombs or weapons on Bloody Sunday, notwithstanding Lord Saville’s findings to the contrary.

Kelly recalls “Soldier F” giving evidence to the Saville Inquiry and says “what really stood out for us was that he showed absolutely no remorse for what he did”.

“We felt a deep emotion that day; four families seeing the killer of their loved one for the very first time. It was like hell listening to what he said and didn’t say,” he says.

Kelly is not critical of other families who can live without prosecutions but he wants his brother’s killer to serve a life sentence.

“It is very personal for me that I see ‘Soldier F’ being prosecuted for Michael’s death. It is vital for me that that happens. He murdered my brother, a young innocent boy, and it is only right because any other murder that happens anywhere in the world the perpetrator is brought to justice and I want to see the full wrath of the law fall on his head.”

John McKinney, as an eight-year-old and the youngest in the family, remembers his brother William, the eldest in the family, walking out to the civil rights march on Bloody Sunday with his stills and cine cameras strapped on, and wanting to go along with him. “He said, ‘No, you have to stay with your mother’.”

William McKinney was a printer at the Derry Journal with a passion for photography. That was the last time John and his mother saw him alive. “I was always with my mother through a lot of the bad times and I was there when she had her bad days. I did not really understand why she was sad but as I got older I really did understand. It kind of transferred over to me, especially in my early teenage years.”

To those British politicians who oppose any notion of prosecutions, McKinney says: “I would love those politicians to come here to the Bogside, to Rossville Street here, and we will take them around and we will show them and tell them exactly what happened here that day, and how people died. You would not do to a dog what those soldiers did that day. Those politicians are wrong, they are protecting people who murdered people here.”

Saville found William McKinney could have been killed by “Soldier F” or by “Soldier G”, who is dead, or by “Soldier H”. His brother hopes for prosecutions but would not be too concerned should soldiers serve limited sentences in the event of convictions. Such an outcome could be emotionally cleansing too for the former soldiers, he suggests.

He says: “I think they would need to search their consciences and admit what happened because if they don’t deal with it in this lifetime they will be dealt when they meet their maker, I hope.”