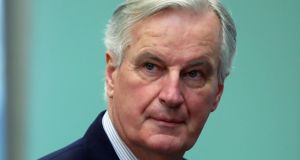 In a last-minute bid to break the deadlock in Brexit talks the EU has offered the UK a new package of reassurances about the Northern Ireland backstop’s exit mechanisms.

Among these is an acknowledgment by the EU of a right to withdraw unilaterally from an all-UK customs union, the central element of the latest backstop proposals in the Northern Ireland protocol, but only as long as the UK maintains Northern Ireland-specific measures.

The move, which would effectively return the backstop provisions to their original version, would almost certainly necessitate the imposition of border controls down the Irish Sea to maintain the integrity of the EU single market. It is likely to face strong opposition from unionists who see any kind of economic controls or checks as a threat to the constitutional integrity of the UK.

The backstop is an insurance policy by which the frictionless border in Ireland is to be maintained in the event that future relationship talks between the EU and UK do not produce an alternative arrangement that also meets the “purposes” of the backstop.

Announcing the package by Twitter on Friday night following a meeting with EU ambassadors, EU chief negotiator Michel Barnier said that the union would be willing also to give legally binding effect to previous assurances given in January about its temporary nature and the willingness of the EU to engage urgently and in good faith during the transition process on talks on a future relationship.

He points to provisions in the arbitration clause in the Withdrawal Agreement which can be triggered if a deadlock is reached over the ending of the backstop. It also “gives to the UK a right to a proportionate suspension of its obligations under the backstop, as a last resort, if the EU breaches its best endeavours/good faith obligations to negotiate alternative solutions.”

Nothing new in what Barnier is offering.

This is a retreat back to the proposal of an Northern Ireland only backstop previously rejected by all sides in the House of Commons.

With a very real deadline looming, now is not the time to rerun old arguments. The UK has put forward clear new proposals. We now need to agree a balanced solution that can work for both sides https://t.co/yN9ZuiVj1M

Mr Barnier’s proposals, which maintain the Withdrawal Agreement untouched, is an attempt to provide the necessary reassurances sought by UK attorney general Geoffrey Cox to allow him to revise his hostile legal assessment of the backstop exit provisions.

Mr Cox’s legal opinion is seen as key to swaying wavering backbenchers in favour of the Withdrawal Agreement in the Commons “meaningful vote” on Tuesday.

Mr Cox’s visit to Brussels earlier this week had been “difficult” by all accounts and there were increased fears in recent days that prime minister Theresa May would not be able to rally sufficient support for the Tuesday vote. Friday’s speech by the prime minister in Grimsby was seen as an attempt pre-emptively to blame the EU for the expected failure of the talks.

UK foreign secretary Jeremy Hunt, in an interview on the Today programme, joined the blame game warning that relations with the EU would be “poisoned for many years to come” if Brussels failed to budge. Brussels was not amused.

Whether the Barnier offer will however be sufficient for angry Brexiteers is not certain. Much of the package, not least the Northern Ireland-only customs union provisions, represents previously rejected proposals. Or, like the emphasis on independent arbitration, fall short of assuring the UK that it will have an independent right to break from the backstop.

The initial response from the UK side was dismissive. Brexit secretary Stephen Barclay tweeted: “With a very real deadline looming, now is not the time to rerun old arguments The UK has put forward clear proposals. We now need to agree a balanced solution that can work for both sides.”

The DUP deputy leader Nigel Dodds said the proposal from Mr Barnier was “neither realistic nor sensible”.

“It disrespects the constitutional and economic integrity of the United Kingdom. This is an attempt to get ahead of a possible blame game and appear positive when in reality it is going backwards to something rejected a year ago,” he added.

Mr Dodds cited Theresa May to say that no British prime minister “could sign up to an arrangement which annexes Northern Ireland from the rest of the United Kingdom”.

“Whilst the European Union has spoken often about their value of the peace process in Northern Ireland, this proposal demonstrates that they have a one-sided approach and a lack of understanding about the divisions in Northern Ireland,” he said. “Just as nationalists and republicans oppose a new North-South border, unionists oppose any new east-west border which would place a new barrier between Northern Ireland and the rest of the United Kingdom,” said Mr Dodds. “We need to work for a sensible deal which can work for everyone in Northern Ireland. It is possible but there must be less intransigence in Brussels,” he added.

Talks will continue in Brussels over the weekend at official level with Mr Cox and Mr Barclay expected to return on Sunday.

Should their discussions prove fruitful Mrs May is expected to travel to Brussels early on Monday morning to give her imprimatur to any deal. She needs to table proposals in the Commons by early afternoon.

“Technical” discussions between EU and UK officials Sabine Weyand and Ollie Robbins will also be continuing in Brussels over the weekend.