Childcare cases are being heard alongside criminal cases ‘in overcrowded courts’ 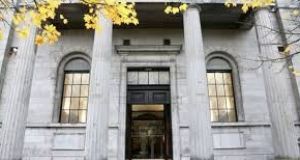 In Galway city all family law cases were held on the same day with criminal cases in other courts in the courthouse.

Childcare cases are being heard in overcrowded and “severely overworked” courts alongside criminal cases, in sometimes dilapidated courthouses without basic facilities or privacy for families, a survey published on Monday warns.

The Child Care Law Reporting Project (CCLRP), which visited 35 district court venues between October 2018 and January 2019, found circumstances “which cannot but affect how childcare proceedings are dealt with”.

“One of the most striking issues that emerged . . . was the volume of cases dealt with by certain courts and the difficulties posed both for the judge attempting to deal with childcare, and for the parties,” said CCLRP director Dr Carol Coulter.

“For example, in one court in one day [Athy, Co Kildare], where there is just one sitting judge, there were 139 cases listed consisting of crime, general civil law, family law and childcare. This clearly poses considerable difficulties in dealing appropriately with cases that may be complex, like childcare. In another district the judge can have over 120 cases listed on family law days.”

Despite the requirement under the in camera rule, that all family law proceedings be held in private, in many of the courts privacy was limited due to a dearth of private consulting rooms for parties to discuss cases. Many had no proper waiting area, meaning people were “milling about” while cases were called by staff using parties’ names.

The physical condition of courts varied widely, with some bright, warm and modern, and others wholly unsuitable, for example, for parents pushing buggies or vulnerable parties waiting hours for their case to be heard.

Among the worst conditions were in the busiest venue in the State – the Dublin Metropolitan District, where childcare cases are now held in the 19th-century Bridewell building. These cases were moved here on a “reportedly temporary basis”.

The reporters found it “very cold” in October as windows could not be closed. Acoustics were poor, making it difficult to hear what was being said. There was no water font or vending machine, and although the building has had some refurbishment it “remains unsatisfactory for childcare proceedings”.

In Dundalk courthouse, there was “little provision for privacy”. In Galway city all family law cases, including childcare, domestic violence and maintenance disputes, were held on the same day with criminal cases in other courts in the courthouse. In Mullingar, there were 126 cases on the family list the day the CCLRP visited.

In Longford, the court was “very crowded . . . with people waiting along the corridor outside the courtroom rather than in the waiting room. A Garda called the cases by their initials . . .

“The presiding judge heard all 90 matters listed as part of the dedicated monthly family law day.” Ten of these were childcare cases and the court sat from 10.30am until 4.40pm.

The review underlined again the need for specialist family courts, with specially trained judges and court staff, in a number of venues across the State, said Dr Coulter.

This would mean the cases of often vulnerable families could be dealt with “sensitively in a suitable environment where their privacy would be assured”. Such facilities should also have easy access for wheelchair and buggy access, separate waiting areas for vulnerable litigants or witnesses including children, and a discreet system for calling parties into court, she added.

Some of the CCLRP’s review of district court venues:

Athy, Co Kildare: No designated waiting area; crowds waiting outside the building for family and criminal cases; courtroom crowded and despite central heating on a hot day, the windows could not be opened in case birds flew in. No facilities for video link or DVDs. With 139 cases on the list, criminal cases were heard first and family law cases began at 3.45pm. First childcare case at 4.50pm. Gardaí called parties to court by the case name.

Arklow, Co Wicklow: No consultation rooms, no reception or waiting areas, crowds waiting outside the building and courtroom crowded. No loudspeaker and gardaí calling individuals to the court. No dedicated family law or childcare cases day, and criminal cases were heard first.

Ballina, Co Mayo: Built in 1830s or 1840s and has not been refurbished recently. No waiting area at all except for a small hallway; little or no privacy.

Cavan town: No reception or designated waiting area. Parties stand in foyer and are called to court by a Garda. Childcare cases heard as part of a list of 67 family law cases on the day CCLRP visited.

Athlone, Co Westmeath: Ramp to access the courthouse but no lift to the first floor where the legal consultation rooms are. No loudspeaker in the court; no facilities for video-link evidence or for showing DVDs of children’s interviews.

Ennis, Co Clare: Courtroom is newly refurbished and comfortable, but no facilities for DVDs or video-link evidence.

Portlaoise, Co Laois: Criminal and childcare cases heard in one court; mix of individuals in increasingly crowded entrance and hall, waiting for criminal, family and childcare cases. Childcare and criminal cases “interspersed” throughout the court’s day.