Thousands march in support of homeless in Dublin

Thousands of protesters turned out in Dublin calling on the Government to take action over the housing crisis. 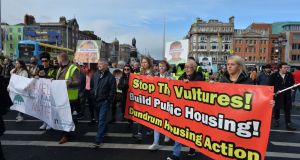 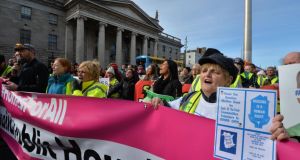 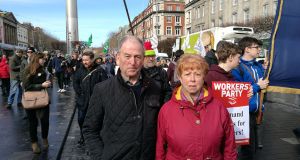 Patsy Doolin (65) from Sandymount, Dublin, criticised the Government for housing people in “shoeboxes”.

Thousands of people took to the streets of Dublin on Saturday in support of the homeless, and called on the Government to take greater action in relation to the housing crisis.

The march was organised by the National Homeless and Housing Coalition – a group of about 50 community organisations and rights advocates – and began from three points in the capital: City Hall, the Housing Agency on Mount Street, and the GPO.

The crowd from the GPO temporarily blocked traffic on O’Connell Bridge as it crossed the River Liffey before looping back onto the north side and making its way down the quays to the Samuel Becket Bridge where it converged with the other marches.

The march, which lasted for more than an hour, was attended by dozens of groups including unions, left-wing political parties, community action groups, migrant rights organisations and homelessness charities.

One man, sitting on O’Connell Bridge begging, spoke to The Irish Times in a low voice as the march passed by.

“I’ve been homeless for a few weeks,” he said. “It’s too much to talk about right now. It was unfortunate circumstances.

‘What am I supposed to do?’

Amy Ní Mhurchú, a third year mature student at the Dun Laoghaire Institute of Art Design and Technology, said she had been struggling for three years to house herself and has recently become homeless.

“I’m staying on people’s couches so I’m not on the street yet, but I can only couch surf for so long,” she said. “People can only do it for so long. That’s where I am right now. It’s horrible because you don’t want to impose on people.

“People out of the goodness of their hearts are letting you stay on their couch. I’m wondering: ‘is their landlord going to come in and am I going to have to sleep on the street tonight? Are they going to get fed up with me?’

“You’re just constantly worried. On top of that, you’re trying to get your thesis proposal written and your course work done, and this is swimming in the back of your head the whole time, and you’re wondering ‘what am I supposed to do?’ ”

Patsy Doolin (65) from Sandymount, Dublin, criticised the Government for housing people in “shoeboxes”, and said communities like Ringsend were being destroyed by the influx of multinational tech companies such as Google and Facebook.

“It’s dreadful to look at people in the street all day having to get out of bedsits, hotels, and these places,” she said. “It’s really disgraceful. This country is a crying shame. That Government hasn’t got a clue. They must have been all reared in castles.

“You see, the whole community in Ringsend will die. We have a tradition down there of GAA, soccer and rowing clubs. If children aren’t going to be around to get involved, that tradition will die. With Google and Facebook now, there’s no space to live in.”

Ian Smith (22), who is studying social science, said he was planning to leave the Republic next year due to the high cost of living. “I’ll maybe come back if I can afford it,” he said. “That’s where we are now with students.

“You have to go away and build yourself up to earning enough to come back to live in your city and your home. I’m lucky I have the support of my parents but there are lots of people who don’t, and where does that leave them? That’s what I think anyway.”

John Renwick from Bunclody, Co Wexford, said he travelled to Dublin for the march as he wanted to show people that it was a nationwide movement.

“I always enjoy getting together with a load of people who are working in the right direction,” he said. “It’s electric. I always go back to Wexford feeling stronger for it. It’s like a battery charge.”