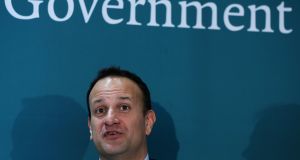 Leo Varadkar: ‘The Government has consistently and strongly opposed the Bill on both political and legal grounds and will continue to do so.’ Photograph: Brian Lawless/PA Wire

Taoiseach Leo Varadkar has written to several members of the US Congress clarifying the Government’s position on the Occupied Territories Bill, amid mounting concern on Capitol Hill about Ireland’s Middle East policy.

In a letter sent to senior figures in Washington ahead of this week’s St Patrick’s Day visit, Mr Varadkar notes the proposal is a private members’ Bill put forward by the Opposition.

“The Government has consistently and strongly opposed the Bill on both political and legal grounds and will continue to do so,” he said. “As we approach St Patrick’s Day, can I take the opportunity to reiterate my deep appreciation for the strong bonds of friendship between Ireland and the US, including our growing and mutually beneficial economic ties?”

The move to reassure the US political community follows a strongly worded letter from 10 members of Congress to Mr Varadkar outlining their opposition to the Bill passed by the Seanad last year, which proposes trade restrictions on goods from the occupied territories.

The letter warned US investment in Ireland will be under threat if Ireland adopts the “ill-conceived measure”.

“We do not want the economic links between our two countries weakened due to ill-considered legislation. The stakes for Ireland are high,” it stated, noting that 67 per cent of foreign direct investment into Ireland is from the US. The draft legislation was championed by Independent Senator Frances Black. Fianna Fáil introduced the Bill in the Dáil.