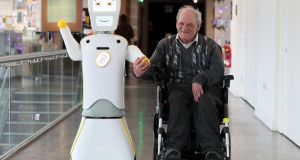 Stevie II pictured with Brendan Crean, who helped trial the robot through the charity Alone, during a demonstration at the Science Gallery in Dublin. Photograph: Brian Lawless/PA Wire

An inquisitively cheerful and artificially intelligent robot that promises to fight loneliness and offer people care and security with the odd bingo night added to the mix has been unveiled at Trinity College, Dublin.

Robotics engineers from the university introduced Stevie II, Ireland’s first “socially assistive robot” to the world at a demonstration at the Science Gallery on Wednesday morning and as soon as he took to the stage it was clear the robot wasn’t shy in front of either the crowd or the cameras.

He waved and smiled at anyone who paid him the slightest heed, faked modesty when people said nice things about him and boasted about his enhanced dance moves as well as a range of other features which could transform how older people and those living with disabilities are cared for.

But while the original Stevie was developed simply to prove, in conceptual terms, that a socially assistive robot could be deployed in long-term care environments, his successor will, his creators say, deliver on the promise of that concept.

The robot uses advanced sensing technologies including laser rangefinders, depth cameras and tactile sensors to interact intelligently and perform tasks and comes with enhanced expressive capabilities to help people warm to him.

Dr McGinn said research had highlighted the need to make the robot more expressive and in doing so his team had managed “to humanise the technology in a way that surpassed our expectations”.

He said a robot like Stevie could have “a wide range of high-impact uses, which may involve performing numerous assistive tasks, helping caregivers, and may even provide new interfaces to existing technologies like video calling, smart sensors, social media, that can be inaccessible to many older adults”.

The Trinity team consulted with experts including nurses and caregivers and older adults living at home or in long-term care facilities during Stevie’s development.

Among those partners was Alone, the national organisation that supports older people to age at home. Its chief executive Seán Moynihan said Stevie could be a game changer.

“Often there is an assumption that older people and technology don’t mix, but the response to Stevie from the older people we work with shows that this is simply not the case,” he said.

Stevie has face and voice recognition and is able to address people he is speaking to directly and understand and reply to commands.

Tony McCarthy, who was part of Stevie’s focus group, has asthma and said having Stevie around had given him a sense of security.

“He reminds me what medications I have to take,” he said. “More importantly, the capacity the robot has to directly make a phone call to emergency services to bring help if a person is incapacitated, I think that is very positive.”

The Trinity team also partnered with the Army Distaff Foundation, a US-based non-profit organisation that operates Knollwood Retirement Community and it tested the technology with residents and staff at the facility.

Feedback was almost universally positive with residents saying they loved the robot’s accent, describing him as “cute”.

When he was visiting the retirement community, he was allowed host bingo nights for residents and proved to be a dab hand at the number calling too.

Mr McGinn said there was no need to fear that Stevie marked the beginning of a takeover by machines. He stressed the technology was “not trying to replace people or things that are uniquely human” but to make life better and easier for both care givers and those they look after.