Amnesty should apply to soldiers who served in Troubles – defence secretary

‘No British soldier should be above the law’, says Sinn Féin Assembly member 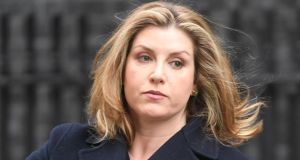 British defence secretary Penny Mordaunt has said she would propose new legal measures to protect soldiers from investigation into alleged offences committed during the course of duty after 10 years, except in exceptional circumstances. Photograph: Victoria Jones/PA Wire.

A proposed amnesty from historical prosecutions for former British soldiers who served in Iraq and Afghanistan should also apply to those who served in Northern Ireland during the Troubles, British defence secretary Penny Mordaunt has said.

But Downing Street insisted that the process for handling legacy issues in Northern Ireland would be dealt with in a separate consultation which will conclude shortly.

Ms Mordaunt said she would propose new legal measures to protect soldiers from investigation into alleged offences committed during the course of duty after 10 years, except in exceptional circumstances.

Prime minister Theresa May’s official spokesman said the government would respond shortly to a consultation on how to deal with historical allegations in Northern Ireland.

“This was subject to a consultation, I think there were 17,000 responses to that consultation. It’s taken a period of time to work through those responses. I would expect the government to be responding shortly.”

Belfast East MP Gavin Robinson said he had been assured by attorney general Geoffrey Cox that any proposal to protect veterans would apply equally across the United Kingdom.

“In fact, he said it would be plainly wrong should it not apply equally. I am therefore perturbed to read in the press –and not hear in this House – that proposals brought forward to protect veterans from our country will not apply to Northern Ireland,” he said. “Aside from the discourtesy to this House, it shows scant regard for people the length and breadth of the United Kingdom who stood to protect our interests, our values and our democracy.”

John Teggart, whose father Daniel was one of the 11 people killed in the incidents knows as the Ballymurphy Massacre in west Belfast in 1971, said any attempt to introduce legislation that would grant an amnesty to British soldiers suspected of crimes in the North would be resisted in the courts.

Mr Teggart described the proposal as “another dirty tricks to get an amnesty for soldiers who committed crimes”.

“When it comes to Northern Ireland or anywhere else a crime is a crime,” he said. “It is covering up for murderers.”

He suspected that at a later stage the British government would attempt to “slip in through the back door” additional legislation to make such a proposed amnesty apply to Northern Ireland.

“No British soldier should be above the law and whether crimes have been committed in Ireland or Iraq, those crimes should be investigated and those responsible held to account,” she said.

“Sinn Féin has rigorously opposed any and every attempt to introduce a statute of limitations or immunity for crimes committed by British soldiers in Ireland. We have stood in support of victims and will continue to do so.”

“It seems to be part of the induction process for British defence secretaries that they should immediately announce plans to give soldiers a blank cheque for the crimes they commit,” said the Upper Bann MLA.

“It doesn’t matter what uniform you wear, everyone must be equally subject to the rule of law.”