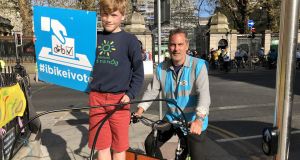 Standing tall on his father’s brand new electric powered bike that frequently ushers him around south Dublin, Ruairí Walsh declares he has no intention of dying from carbon pollution.

“So recycle and use bikes,” he says, succinctly capturing the spirit of a small protest that led dozens of cyclists to Leinster House on a balmy Wednesday evening, ringing their bells in unison and chanting for change in transport investment.

Cyclists demanding attention and improved infrastructure is nothing new but this time their target is – candidates in the forthcoming European Parliament elections, an arena many believe is ripe for furthering green policy.

Wednesday’s protest, organised by the Dublin Cycling Campaign, the most prominent lobby, is calling for a 20 per cent allocation of transport spending to both cycling and walking, a figure they say is based on a UN recommendation.

Demonstrators have mixed opinions as to whether the politicians will pay much attention. But they are resolute in their conviction that policy change is more important than ever.

Ruairí Walsh’s father, Colm, says since investing in his €3,000 electric cargo bike last year – it carries a large front compartment capable of not just carrying a passenger but keeping them dry – his petrol bills have declined noticeably.

“We have just had enough. The city would work so well if we just gave cyclists proper protected infrastructure like they have in the Netherlands, ” he says, with a nod to Europe’s cycling Mecca.

Asked if 20 per cent is perhaps an unrealistic target for funding allocation, Mr Walsh criticises the folly of spending millions on ring roads in Galway, capturing the demonstration’s widespread disapproval of roads investment.

“I think we are reaching critical mass with impatience,” he says. “Also, there is an intelligence: Dutch people cycle because it is easier . . . if you build infrastructure people will follow.”

What chance of success?

Dr Paul Corcoran – who heads up the Dublin Cycling Campaign – is sanguine about how much of a priority cycling infrastructure is likely to be in a European Parliament distracted by its own future among other pressing issues, but says it does feed into broader policy.

As well as helping reduce traffic emissions, he says cycling is increasingly embraced across the continent as a tourism drive. And he points to the large scale Velo routes spanning Russia to Ireland and Norway to Portugal.

“With the increase in e-bikes people are commuting larger distances,” he says. “I would expect that would happen in Ireland too. There is a lack of funding and investment in cycling at the moment. Currently it’s about 2 per cent of the transport budget. We want it to be about 10 per cent.”

As well as pursuing political attention and insisting on a greener, healthier future, much of the lobby’s interest is pure and simple road safety.

“I cycle to work and I think traffic in Dublin is so crazy now, so dangerous, so many different types of transport competing for the same road space,” says Paul Corcoran, from Milltown.

He has had his own near misses, he says, but asked if he believes the politicians are listening on Wednesday, he replies,“no”. Soon, after appeals for further commitment to the campaign and to the movement, the collective bicycle bells jingle one more time before their riders disperse into the traffic.