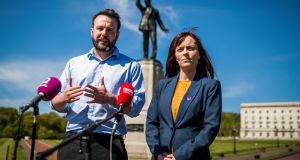 For decades John Hume represented the SDLP in the European Parliament. Even 15 years since he departed the job, the SDLP still sees Northern Ireland’s third seat in the Brussels and Strasbourg-based parliament as “his”.

Now SDLP leader Colum Eastwood is in battle for that place, even though it may be one of the shortest parliamentary occupations by any politician. The job falls away once the UK organises its departure from the European Union – if it does.

“We want to take back John Hume’s seat,” says Eastwood. “All of the impact that John has on the European Parliament, on getting European peace funds, all of those good things that were done, we are still seeing the benefit of that today.

“We are quite clearly the party with the pedigree and the history in terms of European Parliament,” Eastwood says. His campaign will be peppered with returns to Stormont for the latest round of talks.

For the slogan on the SDLP “battle bus”, the party makes a play on the “We send the EU £350 million a week – let’s fund our NHS instead” slogan that helped to deliver the Brexit victory in 2016. Instead, it reads, “Europe sends us €500 million a year – take back control of your future”.

Speaking at the Balmoral Show yesterday, Eastwood declares: “Given that we had the Brexiteers with a lie on their bus we thought we’d print the truth on the side of ours,” says Eastwood. “The European Union gives at least €500 million every year. It’s a conservative figure that we can stand over.”

Much of the spotlight is on the third seat in the three-seat Euro constituency: Diane Dodds and Martina Anderson appear shoo-ins for the DUP and Sinn Féin, but Eastwood, Alliance leader Naomi Long and the Ulster Unionist Party’s Danny Kennedy are battling for the final place.

While the UUP supported remain in the Brexit referendum it now argues the result must be implemented. Eastwood says that returning himself and Martina Anderson would be a useful signal in the battle to overturn Brexit, which he also says is possible.

“If we want to send a message that we are against Brexit then the best way to do it is to elect two Remainers. If we elect two Leavers then that is a message that Boris Johnson and Nigel Farage and Co will use to say that Northern Ireland does not need a backstop, that it is happy with the direction of travel. People need to be thinking of that when they are casting their votes.”

Naomi Long believes that the “Alliance surge” in the local elections will push her over the line, but Eastwood argues that many of those who ran as independents in the locals because of local rows have “DNA that is SDLP”. In the Euros, those votes will return.

Eastwood at 36 is a young leader with a big challenge on his hands to restore SDLP fortunes. Part of that enterprise involved forming a partnership with Fianna Fáil earlier this year. He is still sure it was a good move.

“I said when we launched the partnership this is about the next generation, not the next election. It wasn’t short-term, it is genuinely a long-term policy partnership where we will build it as we go,” he goes on.

The SDLP/FF link-up provoked no resistance in this month’s local elections or in the Europeans now; but it has provoked no huge interest either. “People are intrigued by it although the issue has not come up much. There is no big negativity around it.”

Eastwood believes a Stormont talks deal is far from impossible. Will and hard political graft is required: “We have a massive job to do,” he says. “But we think there should be a deal, and there could be a deal tomorrow.”

Last month, 85-year-old George Mitchell came to Stormont to deliver a pep-talk to politicians, prompting jokes since that it resembled Jurgen Klopp and Mauricio Pochettino’s exhortations to their teams to achieve the impossible dream in the Champions League.

“George’s visit mightn’t have done any harm,” he says, before adding the qualification, “the problem is we have a couple of Solskjaers up there”. Given that he needs every vote, Eastwood will do well not to offend Northern Ireland’s Manchester United fans.