Campaigners see little appetite for No vote in divorce referendum 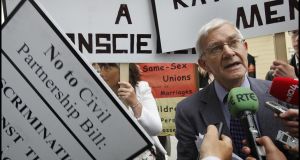 Richard Greene, chairman of the Alliance for Defence of Family and Marriage, says the Government is seeking a blank cheque in terms of setting the separation time. Photograph: Brenda Fitzsimons/ THE IRISH TIMES

When most politicians talk about the last divorce referendum, they use it as a point of reference to warn voters against complacency.

In the years since there has been monumental societal change with same-sex marriage legalised and Irish women now permitted to avail of abortion services in the State. Ireland has also become an increasingly multicultural island where the influence of the Catholic Church has waned significantly.

Given all that has happened since 1995, those campaigning against the proposed change to the divorce laws find themselves in a very different place.

In fact, few organisations are actively campaigning for a No vote on May 24th, when voters will be asked to keep or remove the rule that people had to be living apart for at least four of the past five years before they can apply for a divorce.

If the change is approved, the Government intends to legislate for a two-year minimum period. A second part of the proposed change would remove from the Constitution a provision concerning the recognition of foreign divorces.

Richard Greene, chairman of the Alliance for Defence of Family and Marriage (ADFAM), which is campaigning for a No vote, said the Government was seeking a blank cheque in terms of setting the separation time.

“The only people who are going to benefit from this are the lawyers, because divorce is very expensive,” he said.

Impact on housing and health

He said a Yes vote could lead to more divorces, which could impact on the housing market and health sector.

“This will put pressure on housing because when a family breaks up, one or the other must seek alternative accommodation. There can be pressure on the health service with children needing serious psychological intervention as a result [of parents’ divorcing],” he said.

“The children of divorce fare worse in the long term, educationally and in employment. Having worked in a school, sadly I know that is the truth.”

Mr Greene, who worked as a guidance counsellor in Dublin, contends that a more liberal regime “militates against any serious attempt at resolving marital conflicts. Most marital conflicts can be resolved.” Many couples gave up too quickly, he said.

When asked about relationships where there is some form of domestic abuse or coercive control, Mr Greene said those couples should seek an annulment.

The ADFAM group is urging like-minded No voters to print and distribute a leaflet from its website as it does not have enough funding to run a full nationwide campaign.

Caitríona Lynch, the former president of Curam, an organisation for stay-at-home parents, campaigned for a No vote in 1995. This time she does not see the point in campaigning, although she will be voting against the change.

“We really did believe that divorce was a bad idea for society. But for me, the war is over. I am not one bit interested in this skirmish in the bushes. The culture has changed utterly. I don’t know anyone who would put a penny into a No campaign.”

She said that in the last divorce referendum, she was accused of “scaremongering” when she warned that the law would eventually be further liberalised. She believes “without doubt” that the time limit will further reduce to one year, then maybe six months and then “quickie divorces”.

David Quinn, of the Iona Institute, shares her concerns, and also her doubts that there is any appetite for a No campaign.

“We are not campaigning because there is very little interest or awareness amongst our supporters on this issue. The stakes aren’t remotely as high as the abortion debate, for example,” he said. “But the debate is not about whether couples should wait four years or two years, it is about whether there should be a set waiting time in our Constitution. The Government is saying there should not be. It will be free for them to change this further.”

He said he would prefer to see the time limits expressly referenced in the Constitution as it would reduce the pressure to further reduce the figure.

“What is marriage if it becomes easy to exit?” he asked.

Mr Quinn pointed out a post he recently wrote on the Iona Institute webpage where he referenced the increase in the number of Irish adults who had been through a divorce or separation.

In the same post, he wrote: “Family law is being changed so that the natural ties matter less and less.”

Renua’s European candidate in the Midlands North-West constituency Michael O’Dowd is also calling for a No vote.

“Is it not sensible to allow marriage to remain enshrined in the Constitution?” he asked.

“Changing the period to two years is fine and sensible as nobody wants to be trapped in a relationship that isn’t working. But by removing it from the Constitution altogether you then open it up to continuous tinkering by politicians who may be influenced by whatever way the wind is blowing or what is trending on Twitter.”

He said citizens should cast their vote against the proposal in order to make the Government come back with “a more reasonable proposal”.

It is clear that many on the No side of the campaign feel the race is lost and that arguing against the referendum would result in them being pilloried or dismissed in modern Ireland. Simply put, many of them feel that mounting a full-scale campaign would be pointless, and the fear appears to be borne out by the latest Irish Times poll on the topic.

With less than 10 days to referendum day, it appears the Constitution is set to be changed again.