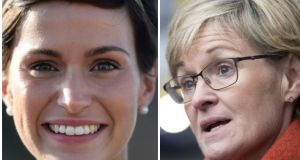 Fine Gael has reallocated territory between its candidates in the European election campaign as it attempts to increase its seat haul in the parliament.

The party has told sitting MEP Máiread McGuinness to give several counties in the sprawling Midlands North West constituency to former Rose of Tralee Maria Walsh, who Fine Gael believes has a strong chance of taking a second seat.

Along with Ms McGuinness, the outgoing constituency MEPs are Independent Luke Ming Flanagan, Sinn Féin’s Matt Carthy and Independent Marian Harkin, who is not contesting this election.

Regina Doherty, Fine Gael’s director of elections for the European contest, on Saturday issued directions to all the party’s MEP candidates dividing up Midlands North West, as well as Dublin and Ireland South, the other two constituencies in the republic.

Ms Doherty had said that in Midlands North West, Ms McGuinness should be allocated Meath, Kildare, Longford, Westmeath, Cavan and Monaghan. Ms Walsh was to get Galway, Mayo, Roscommon, Leitrim, Sligo and Donegal.

However, a fresh instruction has been issued to both candidates to instead give Longford and Westmeath to Ms Walsh.

Ms McGuinness said there are no tensions between the two party candidates.

“It makes sense from a party point of view,” Ms McGuinness said, adding that she hoped people were not putting too much emphasis on last week’s Irish Times/Ipsos MRBI opinion poll which showed her holding a substantial lead over constituency rivals.

The poll put Ms McGuinness on top on 26 per cent, followed by Independent Luke Ming Flanagan next on 16 per cent, Matt Carthy of Sinn Féin on 14 per cent, Ms Walsh on 11 per cent, Independent Peter Casey on 9 per cent and Brendan Smith and Anne Rabbitte, both of Fianna Fáil, on 8 per cent and 5 per cent respectively. Fianna Fáil sources said its constituency division between Ms Rabbitte and Mr Smith will not change before polling day next week.

Is there momentum behind Walsh?

Ms McGuinness also said voters are in a “brighter frame of mind” during this election campaign than during the previous election five years ago, which was dominated by the issue of water charges.

In her earlier instruction on Saturday, Ms Doherty, the Meath East TD and Minister for Social Protection, said the Irish Times Ipsos/MBRI poll is “a poll and not the poll”.

“We know how other polls have got it wrong in the past and our focus is firmly on getting the best possible result at the May 24th ballot. Nevertheless, this opinion poll reflects the feedback we have been getting back from our canvass teams across the country.”

A meeting of the Fine Gael executive council earlier this week also heard claims that momentum is with Ms Walsh and that she could take a second Fine Gael seat in Midlands North West if enough effort is put into her campaign.

Separately, Fine Gael’s local director of elections for the local elections, also taking place next Friday, has attacked one of his ministerial colleagues over failing to promote all council candidates in his constituency.

John Paul Phelan, who is also Minister of State at the Department of Housing, told the party’s parliamentary party meeting this week that it is not “tolerable” that a Minister – whom he did not name – did not promote all local candidates in election leaflets.