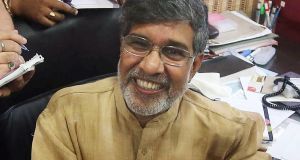 Kailash Satyarthi: “Eradication of trafficking, forced [child] labour, bonded labour is supposed to be accomplished by 2025 and unfortunately it seems that the world is failing again its children.” Photograph: Money Sharma

Mr Satyarthi, who received the Nobel in 2014 for his work in the area of children’s rights, believes the international community must now come together to combat the online threat.

The Taoiseach, he said, had expressed support in principle and joins a list of political and other figures already consulted on the proposal, including German chancellor Angela Merkel and Pope Francis.

Also discussed during their meeting on Monday was the need for advancement of the UN’s sustainable development goals on children’s rights, particularly those aiming to eradicate child labour, modern slavery and human trafficking by 2025.

“[Mr Varadkar] was very positive and he said that he will definitely see how he can support this idea. But he was [also] very concerned about this online pornography and sexual abuse issue,” Mr Satyarthi told The Irish Times.

“In principle he supports both these things: to carry forward the agenda of children, the most marginalised children, as well as the issue of online abuses.”

Mr Satyarthi has campaigned in the area of children’s rights since 1980 when he founded Bachpan Bachao Andolan – the Save the Childhood Movement – which would go on to help free tens of thousands of children from slave labour.

He has also spent considerable time pushing legislative reform. In his native India, he helped ensure the passage of the Child Labour Act in 1986 and later, in 2009, the right to free and compulsory education.

He is the recipient of multiple humanitarian awards, and his focus now lies firmly on UN policy towards global rights, both in terms of existing sustainable development targets and in his proposed convention on online criminal activity which he hopes can reach draft form next year.

He was in Dublin to give the Edward J Phelan Lecture at the International Labour Organisation (ILO) Centenary Conference.

“Eradication of trafficking, forced [child] labour, bonded labour is supposed to be accomplished by 2025 and unfortunately it seems that the world is failing again its children,” he said of ongoing UN objectives in the area.

“We have not committed enough funding in ODA [official development assistance]. So the promises were made but unfortunately they are made to be broken. This is very serious.”

According to the ILO, by 2025 it is expected that 121 million children will still be working as child labourers.

On the subject of his proposed resolution on online activity, Mr Satyarthi noted that last year alone the child pornography industry was worth up to $10 billion.

“We have to have a transborder real-time monitoring mechanism and urgent action,” he said, adding that Interpol had also supported the idea of greater international co-operation.

Mr Satyarthi recently founded the 100 Million campaign which aims to help young people champion the cause of reform in children’s rights. It is expected to begin engaging with Irish secondary schools and third-level student unions in the coming weeks.

In a changing technological and political world, he remains confident improvements can continue in the area, particularly with the involvement of coming generations.

Noting in particular the recent examples set in addressing gun violence by the March for Our Lives movement in the US and by Swedish environmental activist Greta Thunberg, he said: “We see that when the politicians and the international community fails then the youth, power in youth voices emerge.

Dublin Port would end up ‘in the courts’ if it changed post-Brexit ferry times 16:21
Gardaí recover €1.8m from money mule bank accounts in major investigation 16:15
Government accused of treating student nurses like ‘slave labour’ 15:59
National Missing Persons Day: ‘You don’t ever give up hope’ 15:53
Three to remain in jail until they agree to stay away from Roscommon farm – court 15:38