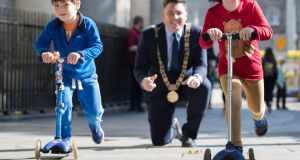 Dublin City Council is getting a “poor deal” in relation to plans for the development of hundreds of housing units at the O’Devaney Gardens site in the north inner city, the Lord Mayor of Dublin Paul McAuliffe has said.

The Fianna Fáil councillor said the council was working with management on a plan devised in the previous council term “to try and resolve it”.

Over 800 residential units are to be built on the site near the Phoenix Park, with construction due to be completed within four years.

A report on the plan, presented at the council’s central area committee meeting last week, announced Bartra Capital as the preferred developer.

The plan will see half of the 824 units becoming privately-owned, with 30 per cent (192) to be social housing and 20 per cent (165) as affordable housing. Some 56 of the houses are already under construction as part of a separate deal with Careys Construction.

“We don’t want to get into a case where because we (councillors) want better that we end up delivering nothing,” Mr McAuliffe told reporters on Tuesday.

“That’s a real difficulty because there are people who want these houses. They are on the list but equally there are many more out there that won’t get them because we’re getting a poor deal on the site.

“Let there be no mistake, we are getting a poor deal on O’Devaney Gardens. The difficulty is that we don’t have the resources to build public housing the way we want to.”

Mr McAuliffe said there was a solution to the O’Devaney Gardens plan at Government level.

Separately, Mr McAuliffe said the Government should be “throwing money at me” to extend the Dublinbikes scheme, which celebrated its 10th anniversary earlier this month.

“Why is the Minister for Transport not throwing money at me to roll out the Dublinbikes scheme right across the whole city? It’s absolutely crazy that Dublinbikes doesn’t go into our urban villages,” he said.

“We should be using our arterial roads and it’s such a simple scheme that people love. The stationless bike schemes have their place but they are no way as successful as the Dublinbikes scheme.

“The Government should be throwing money at me as Lord Mayor to make the Dublinbikes scheme work so that we can get more people to shift from cars to bikes.”

The council has said the Dublinbikes Strategic Planning Framework 2011-2016, which set out for the expansion of the scheme is under review with regard to the recent “technological advances in public bikeshare and the possible different configurations and options that can now be considered in any future expansion”.

Mr McAuliffe was speaking at the launch of Car Free Day 2019, which will see College Green closed to motorised traffic this Sunday between noon and 4pm. A variety of activities and events will be open to the public.