An Post workers to be involved in Garda text alert system 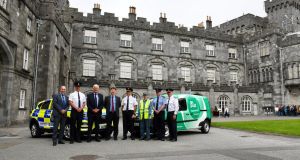 Postmen and postwomen will pass on information to gardaí that may help solve or prevent crimes in the areas where they deliver under a new arrangement between An Post and the Garda.

The scheme is getting under way in the Carlow-Kilkenny division where more than 100 An Post delivery staff are being included in a text alert scheme.

It means the postal delivery staff will get regular text alerts about crimes reported to the Garda in the areas where they work.

They will be able to report back useful information to local gardaí, including sightings of suspects or vehicles or stolen property, that has been circulated in the text alerts.

“The text alert will be used to inform local postmen and postwomen of any suspicious or criminal activity in their postal area once it is reported to gardaí,” Garda Headquarters said in a statement.

“It will also advise on any other policing matters relevant to a particular area.”

Launched on Tuesday as the National Ploughing Championships opened in Co Carlow, the Garda and An Post said the new scheme underlined their commitment to rural Ireland.

“Just over 100 postmen and postwomen in Kilkenny and Carlow have signed up to support this new text alert initiative,” said Chief Supt Dominic Hayes.

“This is bound to have a very positive effect on disseminating advices and warnings in relation to crimes that have been reported to the gardaí.”

Chief Supt Hayes added the extension of the community text alert scheme to postal staff came after the scheme had helped bring about a significant decrease in the burglary in rate in recent years. There has been a reduction of some 65 per cent in Carlow-Kilkenny since 2013.

Brendan Cloonan, An Post head of security services, said the company was very pleased to be working with the Garda in aiding crime prevention.

“Working together we’ll do all we can, everything possible to support our communities,” he said.

As part of the new crime prevention initiative being rolled out first in the Carlow-Kilkenny division, crime prevention literature will be delivered to homes and distributed in post offices across the division.

Garda members will also man crime prevention stands in local post offices in a further bid to educate people about crime prevention “while also increasing the visibility of gardaí in the community”, the Garda said.