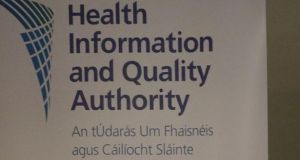 Residents of a centre for people with disabilities in Co Meath told health and social care standards inspectors they were unhappy living there and some of them said they felt “scared” in their home, an inspection report said.

The Health Information and Quality Authority (Hiqa) published 21 inspection reports on designated centres for people with disabilities on Wednesday.

On an unannounced inspection last September of Evergreen Lodge, operated by Redwood Extended Care in Meath “it became apparent that some residents were unhappy living in the centre”, the report said.

“Some residents told the inspector they felt scared in their home and had made formal requests to transfer to new centres. However, whilst the provider was aware of the residents’ wishes, they were yet to facilitate these transitions. Residents spoke fondly of staff within the centre and said they were comfortable raising their concerns with staff and with management,” the report said.

There were five adults living in the centre, which accommodates adults over the age of 18 years with intellectual disabilities, autistic spectrum and acquired brain injuries who may also have mental health difficulties and challenging behaviours.

The inspection report said one resident had been admitted to the centre without an appropriate impact assessment being conducted prior to their admission.

“This contributed to adverse peer-to-peer incidents occurring, which negatively affected the quality of life of some residents.”

The report said the admissions procedure “impacted negatively on the quality of life of some residents and did not adequately take account of the need to protect residents from abuse by their peers”.

The inspector found that not all residents were adequately protected.

Overall, the inspector was “not assured that the current systems of governance and management in place were effective in ensuring a safe or appropriate service to the residents”.

In its response, the centre assured Hiqa that any new resident being considered for admission to the service would have an impact assessment completed as part of their initial assessment to ensure that the resident would be compatible with the current residents living there.

The inspection reports published on Wednesday found a “good level of compliance” with regulations and standards in 15 centres, including centres operated by RehabCare, Resilience Healthcare Limited, St Aidan’s Day Care Centre, the Cheshire Foundation in Ireland, and Western Care Association.

In these facilities, the provider was ensuring a good standard of care and quality of life to residents at the time of inspection, Hiqa said.

Non-compliance with regulations and standards was found in six inspections.

A report on a centre operated by St Michael’s House at Parkview House in Meath found that there had been safeguarding issues in the centre which had not been appropriately managed.

Reports on six centres operated by St John of God Community Services found three were meeting the needs of residents in line with the regulations and standards, but non-compliance was identified in three others.