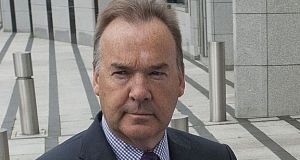 The Garda Síochána Ombudsman Commission (Gsoc) has opened an investigation into the circumstances of the death of the lead investigator into the 2016 Regency Hotel shooting in Dublin.

The Gsoc announcement comes after Patrick Hutch walked free today from the Special Criminal Court after charges against him for the murder of David Byrne at the Regency Hotel in Dublin were dropped by the State.

The senior detective’s death occurred just weeks into the trial of Patrick Hutch jnr (26) of Champions Avenue, Dublin 1, for his alleged role in the shooting which left David Byrne dead and escalated the feud between the Hutch and Kinahan criminal gangs.

The Director of Public Prosecutions (DPP) announced on Wednesday it was dropping all charges against Mr Hutch because the death of Det Supt Fox meant “the prosecution is not in a position to lead evidence on a number of evidential topics”.

Two Gsoc investigators were in court taking notes during the short hearing.

Today a Gsoc spokesman confirmed it has opened “an investigation into the circumstances giving rise to the death of the late Det Supt Fox”.

The ombudsman appealed for gardaí and other agencies to co-operate with its investigation.

“Given the Gsoc’s limited resources, considerable co-operation from all parties involved will be required for an effective investigation to take place. Gsoc is conscious that behind the events which have given rise to this investigation families and friends continue to mourn the deaths of loved ones.”

It confirmed it has kept “a watching brief” over court proceedings throughout the last year.

Gsoc had previously been examining the death under section 102 (1) of the Garda Síochána Act, 2005, which mandates that an inquiry must take place if someone comes to serious harm as a result of Garda actions, even if that harm is self-inflicted.

Now that all charges have been dropped and the trial is over, that examination has transitioned into a full investigation into what happened in the lead-up to Det Supt Fox’s death.

Confirming the investigation, a Gsoc spokeswoman said “at this stage” she couldn’t give the exact reason it has been launched or what exactly it will be looking at.

Separately, Minister for Justice Charlie Flanagan has asked Garda Commissioner Drew Harris to initiate a review of the collapse of the Patrick Hutch trial.

The Minister described the withdrawal of the case against Mr Hutch as “very disappointing” but said the DPP was fully independent in her functions.

Mr Flanagan said that following the sudden death of the senior Garda officer involved in the case, an experienced senior officer was appointed last year to review the case and liaise with the DPP.

He said that following today’s events, he had asked the Mr Harris to undertake a review to “ascertain what lessons learned from the collapse of this trial”.

Fianna Fáil justice spokesman Jim O’Callaghan said the collapse was “troubling” particularly since strong identification evidence had been given at the commencement of the trial.

“I can understand why the family of David Byrne are dissatisfied with the outcome and why they believe that justice has not been done. I believe some effort should be made to explain to that family and the public what information came to light after the trial was adjourned last year,” he said.

Donnchadh Ó Laoghaire of Sinn Féin said the killing of Mr Byrne in the Regency Hotel had kicked off a ferocious feud, unprecedented in its violence, leading to countless deaths, including innocent people.

“It is worrying that the case which the DPP had constructed, or thought they had constructed at least, fell apart, to such an extent that they entered a nolle prosequi.

“This is significant, particularly in such a case, and the circumstances under which the nolle prosequi was entered warrants further examination.

I believe there needs to be a review, sought by the Minister for Justice, in to how this case was handled from beginning to end,” he said.

Clothing and footwear seized in Cameron Blair murder inquiry 12:16
Election 2020 outtakes: Vintage van and limo prove a stretch 12:14
Election 2020: ‘We all think the health service is a lost cause’ 12:04
Fianna Fáil’s pitch on health is strong on diagnosis yet less so on cure 12:03
Gardaí suspect botched murder attempt was bid to avenge Mulready-Woods death 11:56